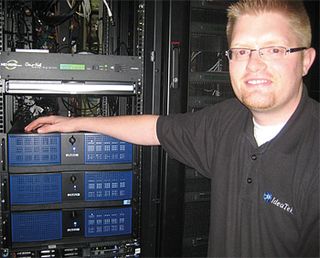 Daniel P. Friesen
BUHLER, KAN.
IdeaTek Systems is a small-town company that provides TV, Internet, and phone, as well as Web hosting. We also do computer consulting work and handle repair services for businesses and consumers in rural areas of central Kansas.

About seven years ago, we became heavily involved in dial-up Internet services (still a viable product at the time). However, we knew that dial-up was not sustainable, and sought a long-term solution to the service issues facing the rural communities we cover.

We knew that we had to develop processes and business cases for deploying advanced communications services in rural communities such as ours, so in 2008, we began providing a fiber connectivity service known as Fiber to the Home (FttH), and at the same time launched IdeaTek Communications, our FttH division, which uses both adapted and unique deployment strategies.

Today we operate over 250 miles of fiber optic cable. I believe that our FttH project is one of the most important communications projects for rural Kansas established during my lifetime.

We recently deployed a brand-new state-of-the-art video headend that allows us to provide more than 300 digital channels, including HD, local programming, and weather information. And that new headend's architecture includes DVEO's multichannel transcoder/scaler—the MPEG Gearbox RF/IP. This unit receives transport streams, transcodes them to MPEG-2 or H.264, and outputs them to an IP network. It accepts several varieties of inputs, including 8-VSB (SMPTE 310M), DVB-S/S2, DVB-T, DVB-ASI, and IP.

We purchased three of these devices and use them for off-air reception of digital broadcasts that are then encapsulated into IP and streamed out to our customers' set-top boxes. We also use the Gearboxes to downconvert video from HD to SD with signals received in a native HD format. They're also handy for transcoding some popular channels from MPEG-2 to MPEG-4 to conserve storage space on a customer's DVR.

We're very pleased with the performance of our DVEO Gearbox products. They're simple to configure and do exactly what we need them to do, and also what we were promised they would do. We built our video headend with reliability and affordability in mind—DVEO products provide both. Our integration contractor was very skeptical about an "affordable" off-air receiver/encoder, but became so convinced that the company is recommending the product for use in other jobs.

In addition to reliability and affordability, it's important to us that a company be responsive and focused on our needs. The decision to use DVEO became much easier when we saw how they took care of us during the entire presales process. We received quick, responsive and friendly service from people who cared about what they were doing. I wish every part of our video system implementation had been this easy.

Daniel co-founded IdeaTek Systems in 1999. He may be contacted at daniel@ideatek.biz.