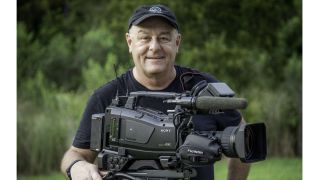 The switch to the F55 also meant giving up my Fujinon 22x zoom lens because the F55 had a super-35mm sensor.

Fortunately, Sony has started building 2/3-inch 4K ENG cameras with native B4 lens mounts and recently released the PXW-Z750, the world’s first 2/3-inch 4K camera with three CMOS sensors, global shutter, S-LOG, 10-bit 4:2:2 codecs and a native B4 lens mount. This is everything I wanted in 2013, but the technology didn’t exist at the time. So, I made the decision to retire my F55 and switch to a Z750. The question was, what lens should I use?

I’ve been a loyal Fujinon owner/operator since my first 2/3-inch camera in 1984. I’ve had to operate other brands of lenses many times, but I never felt they performed as well as my Fujinon lenses, so there was no question what lens I would use for my Z750. I zeroed in on Fujinon’s UA lenses, the most suitable for 4K productions. I found the image quality of all of the UA lenses was phenomenal, so my decision really came down to the focal length and zoom range.

I narrowed my choices to the UA18x5.5BERD and the UA24x7.8BERD. Fortunately, I got to test drive both, but it was hard to choose—both lenses produce stunning images, are tack sharp, have smooth focusing, excellent servo zooms and fast apertures.

I’m primarily a long-lens shooter of sports, wildlife, aerospace and other subjects that benefit from having a long lens, so the 24x was first on my list. According to Fujinon, the UA24x7.8 zoom is their smallest and lightest 4K HDR broadcast lens, and it did not disappoint. The 24x7.8mm focal length is roughly the equivalent to a 20mm to 468mm zoom on a super-35mm camera. Plus, like all ENG lenses, it has a built-in 2x extender that doubles the equivalent focal length to 935mm.

The 18x5.5—about the same size and weight as the 24x—is ideally suited for handheld shooting. I have never used a wide-angle lens that I liked better than this one. It made the Z750 feel perfectly balanced on my shoulder, and I’m sure I could shoot for hours with no fatigue. One thing I dislike about other wide-angle lenses is the barrel distortion you see in pans and tilts, but I didn’t see anything objectionable on this lens. I think the 18x zoom would be more than adequate for most shooting requirements, especially when you factor in the 2x extender. Fujinon has done an amazing job of improving extender performance.

Ultimately, I chose the UA24x7.8BERD because of the longer focal length. It feels great to be working again with a 2/3-inch camera and a stunning Fujinon lens. If you’ve grown weary of big sensor cameras and their limited lens choices, I suggest taking a look at how the 2/3-inch ENG world has evolved. I think you’ll be pleasantly surprised.

Doug Jensen is the owner of Vortex Media and has more than 40 years’ experience working in all facets of the television and video production industry. He is on the faculty at Maine Media Workshops and has produced more than two-dozen independent master class training videos and camcorder field guides. He can be contacted at www.DougJensen.com.