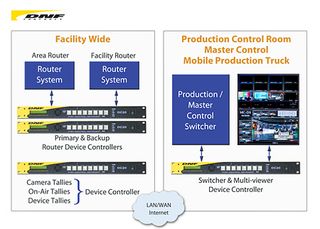 Tally Manager gives broadcasters reliable, responsive tallying that is simple to set up, use, expand, and maintain. It offers end-to-end management of monitor wall UMDs, on-air, record, and device tallies.

It monitors the signal-path devices, looking back to the originating video source name and what is selected on the PGM bus of the production switcher or master control switcher, to control the primary and secondary tallies, as well as UMD text on the monitor wall. This scalable, real-time tally solution was designed and built for the demands of television broadcast, live production, and event production.