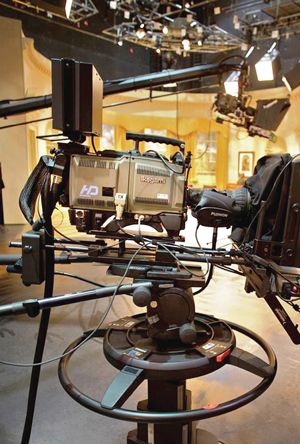 One of the HDK-77EC cameras in use at CRM Studios DALLAS— CRM Studios is one of the largest video production and post production companies in the Southwest. Our “Stage A” is the largest television studio between the East and West coasts, and the services we offer our clients are comprehensive to say the least. When we say we do “script to screen and everything in between,” we really mean it.

Working in so many disciplines is rewarding, but it also means that you have to get your technology choices right the first time. When we became the production home for Glenn Beck’s new “GBTV” media operation, Ikegami HDK-77EC full digital HD native multiformat CMOS camera systems quickly emerged as the clear choice for this ambitious initiative.

KEEPING THE CLIENT HAPPY
At CRM, our primary goal is in meeting the client’s requirements, and the Ikegami HDK-77EC’s superb imagery allows us to do exactly that. Glenn Beck’s company, Mercury Radio Arts, is staffed by a highly experienced and knowledgeable production team that was previously based in New York City, and their expectations for shooting his daily radio shows and TV programs were at the world-class level.

We have four cameras on the GBTV set and what we get from them on a daily basis is a look that can best be described as “natural”—what we see on the monitor is an excellent match for what you’re seeing live on the set. You can “paint” them any way you’d like of course, but you’ll get a very sharp picture from the Ikegami HDK-77EC straight out of the box on day one.

One of the most satisfying aspects of our cameras has been the support that we’ve received from Ikegami. Once we knew that CRM would be hosting GBTV’s production, we had slightly more than two weeks to be completely ready. Even though we placed our order on Dec. 15, Ikegami had us ready to go right on schedule on Jan. 2 by delivering all four cameras within a very tight timeframe.

The Ikegami HDK-77EC proved extremely easy to use , which was a big factor in helping us to be ready for GBTV right on time. And the cameras have been 100 percent reliable throughout their sizable workload— we shoot a packed schedule of five Glenn Beck shows a week, plus another five to seven shows weekly for his Web TV channel. There hasn’t been a single issue so far, but whenever an upgrade has become available, Ikegami’s support has paid us a visit.

With their online digital content delivery model, GBTV and Mercury Radio Arts are ahead of the curve, and at CRM Studios we knew we had to raise our game to meet their strict standards. Ikegami has been an invaluable part of helping us to do just that—we couldn’t have done this project without them.

Michael Murray is director of IT and broadcast engineering at CRM Studios. He may be contacted atmichaelmurray@crmstudios.tv.