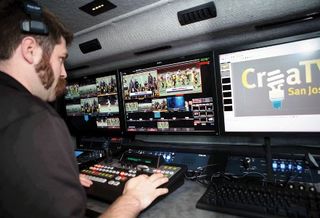 Our new van is seeing plenty of service, mostly in recording local high school football games, but we have also used it in coverage of roller derby events, city meetings, and our own CreaTiVe Awards program.

NO NEW KID ON THE BLOCK

Justin Cowgill We’re no strangers to Broadcast Pix. Before the implementation of the new van, we were already using a Granite 1000 in connection with our larger studio, and have a Slate 1000 installed in our smaller studio. We also use a Slate Portable for covering some remote events. In addition, we recently included Slate 500 systems in four portable production studios for San Jose schools as part of a grant project. As my staff and I regularly train community volunteers to produce television programs, the decision to purchase another Broadcast Pix system made a lot of sense from a training perspective.

That said, with an integrated production system inside, the Granite was well suited to our needs in the production vehicle. In any mobile television production unit, space is always a big consideration. Granite includes many features built into it that would take up additional rack real estate and also add to the heat load, so this made it a big plus in our mobile application. Also, each piece of extra gear adds cost and is another potential point of failure in the system. Our Broadcast Pix Granite purchase has really paid us some big benefits in these areas and made it a much more affordable way to go mobile.

CreaTV makes extensive use of Granite’s Fluent workflow tools. Its built-in Harris character generator provides us with lower-thirds, scores, and sponsor graphics during sporting event coverage, and the unit’s Fluent animation store delivers transitions for use in instant replays. We also make a lot of use of the Fluent clip store in connection with show openings and bumps.

MULTIVIEWER IS BIG BONUS
The four 24-inch monitors in the truck are fed using Fluent-View, Granite’s own built-in multiviewer. We also purchased the quad monitor option, allowing each of the big monitors to be configured individually to best suit the needs and preferences of crew members at the TD, graphics, audio, and engineering operating stations. At one remote event during the past year, we wound up with a damaged monitor. Fluent-View provided us with the flexibility to set up a workaround, and it was business as usual, even with a reduced monitor count. In addition to being a potential show saver, we’ve found that it’s easy to set up, too.

We’ve been using our new van for some time now and very pleased with the unit and the Broadcast Pix technology that anchors it. It’s good to know that we have a very solid system.

Justin Cowgill is director of facilities and technology at CreaTV San Jose. He may be contacted at justin.cowgill@creatvsj.org.

For additional information, contact Broadcast Pix at 978-600-1100 or visit www.broadcastpix.com.