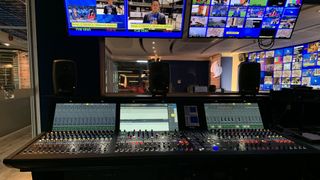 The purchase included a 48-fader mc²56 mixing console with DALLIS frame for Caracol’s news studio, a second mc²56 for the company’s new OB van and a mc²36 console for its Studio 10 facility, Lawo said.

Complicating matters was the media company’s safety protocols established to protect workers during the pandemic. They require Caracol engineers to monitor and meter critical audio signals from home.

Both setups were satisfactory, Lawo said. As a result, both software packages will be configured for long-term testing. Eventually, they will become a permanent part of the installation.

“The question for us was, how can the engineers both listen to and meter the audio signals while not on site,” says Egea. The solution makes it possible for the mc² console core to supply its audio signals to a facility computer.

“Audio signals were supplied to the streaming network via the Ravenna card in the core and collected from the network on a PC using AoIP Stream Monitor or RƎLAY VPB software,” says Egea. “By accessing this computer via Teamviewer or Remote Desktop through a second NIC, Caracol engineers can now conveniently monitor the most important signals from home. This setup offers a very flexible monitoring situation and has simple, intuitive GUIs to quickly create a suitable monitoring overview.”

While the recent pandemic has heightened interest in remote workflows, Lawo has a long history of product development that enables these approaches, says Jesús Lozano, CEO of Lawo solutions partner Videoelec.

“Now we can use them not only for production but also, under adverse circumstances like the pandemic, for keeping project timetables and delivery schedules, and for enabling customers to remain on-air or in production,” he says.