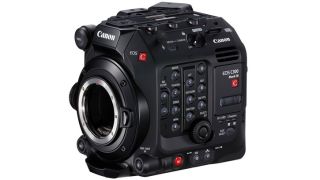 MELVILLE, N.Y.—Canon is preparing to launch two new cameras that are designed for the capture of high-resolution content, the EOS C300 Mark II and EOS R5 Full-Frame Mirrorless cameras.

The C300 Mark III is a Super 35mm camera that has a Dual Gain Output sensor and employs a modular design and interchangeable lens mount optional accessory for customizing the camera for specific needs.

The C300 Mark III can capture HDR content by reading out each pixel through two separate gains—one that prioritizes saturation in highlight areas and another that suppresses noise in the shadows. This creates an image with up to 16+ stops of dynamic range for 4K/60p content. In 2K recording mode, it features recording speeds up to 180p. The camera also features Canon’s DIGIC DV 7 video imaging processor for recording of 4K and HDR, and for the processing of high-speed video recording, including 4K at up to 120p.

The EOS R5, meanwhile, is the latest edition of Canon’s EOS R series of cameras that will be able to capture 8K video. While the camera is still in development, Canon has announced a bunch of new specifications that will be available with it.

For more information on these cameras, visit usa.canon.com.