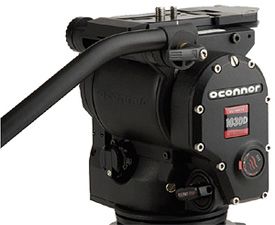 The camera support equipment industry works hand-in-glove with the camera makers, and new products for specific breakthrough cameras are introduced as those cameras debut.

Cartoni will introduce a new version of its Master head, the Master MK2, featuring a new counterbalance system with increased range. It now handles camera payloads between 6.6 and 66 pounds. The new head provides a horizontal position lock and the Euro-style quick release plate.

Libec will debut the REMO30, a high-grade, high-performance pan and tilt remote head. The REMO30 is equipped with a unique drive system that transmits motor power accuracy, ensuring a perfect camera balance and offering smooth camerawork at all times. For center of gravity positioning, fine tune adjustments can be achieved with the tilt arm at 90 degrees.

Miller Camera Support will premier its Skyline 70 fluid head, designed for lightweight sports and outside broadcast productions and a payload range from 10 to 82.5 pounds. Also new from Miller is the lightweight, compact and rugged Compass 12 tripod system with a 4.4 to 22 pound payload range. In addition, Miller will introduce the Compass 25 fluid head, a lightweight 100mm unit for ENG, with a selectable counterbalance system and accommodating payloads ranging from 8.8 to 30.9 pounds.

Vinten Vector 430 Pan and Tilt HeadOConnor Engineering will introduce its Ultimate 1030D fluid head, supporting up to 30 pounds. It features a stepless and smooth pan/tilt fluid drag system designed for ultimate control and stability, along with OConnor's Sinusoidal Counterbalance system. Also new is the Ultimate 1030Ds fluid head. It has the same features, but comes with an extended payload capacity of 41 pounds. OConnor will also debut its 30L carbon fiber tripod, which combines the benefits of new-age materials with precision engineering to create a support system. It's lightweight, yet solid and stable, and supports payloads up to 209 pounds.

Sachtler will premier production models of its Ace M tripod system, designed for small HDV camcorders and video-enabled DSLR cameras. With a payload range of up to 8.8 pounds, a five-step counterbalance and new patented SA-drag, the Ace system provides a genuine Sachtler broadcast feel. Sachtler will also showcase its Video 18 S1 ENG/EFP series. The head now sports a 16-step counterbalance that allows extremely fine tuning. It also has a "Boost Button" for a

Shotoku Broadcast Systems will introduce its SG900 pan and tilt head, designed for outside broadcast, studio and portable cameras with prompters. The SG900 supports up to 198 pounds, and features smooth operation, single knob balance adjustment, and robust construction in an ergonomic design. Also new from Shotoku is the SP tripod series, featuring economical, streamlined and ergonomically designed models supporting payloads from 4.4 to 33 pounds.

Tiffen will unveil a new line of Davis & Sanford tripods, designed for the professional shooter. The new tripods incorporate high-quality engineering and an attractive price-performance value.

Vinten will showcase its Vector 430 pan and tilt head designed for applications that incorporate both compact box lenses and large EFP barrel lenses. It allows Vinten's Perfect Balance technology to be incorporated into a compact and lightweight package, accommodating payloads ranging from 22 to 94.8 pounds. The company will also show encoded versions of Vector 430, 750 and 950 pan and tilt heads that are designed for use with Vinten's Virtual Reality Interface (VRI) box. They provide precise, real-time positioning to allow graphics to be placed perfectly into a live environment.

Matthews Studio Equipment will show a new motion control system to provide remote and repeatable control to their DC Slider that was introduced last year. Also new is the HD-DC Slider, with a weight capacity of 70 pounds. This heavy-duty slider is precision-balanced and allows for the full range of angle functions as well as the vertical tower and mini jib functions. In addition, Matthews will unveil its smart phone adapter, which allows secure and precision mounting of the most popular smartphones to take full advantage of the apps that a crew might use on set, location studio, or even in a vehicle.

Polecam USA will premier its Starter Pack, which is aimed at DSLR users who want to add production value through sweeping crane shots. It weighs 33 pounds and comes in a specially-designed foam insert that fits into a Pelicase. Also new is the Polecam Wire Strut System, designed to add stability to the pole, while still retaining the crane's flexibility and versatility. It reduces vibration during rapid movement shots, shots from moving vehicles, and outside work in challenging weather.

Tiffen will show its Steadicam Merlin 2 camera stabilizing system that incorporates the same Steadicam engineering in feature-film stabilizers. The unit provides smooth, precise and elegant camera moves, and supports a wide range of DSLR, compact and professional camcorders, point-and-shoot cameras and other video-capture device models weighing from 0.5 to 5 pounds.

Cartoni will introduce a motorized kit for its Spinhead L-shaped head, and is designed for use on a tripod, dolly, camera car, or can be underslung from a crane or a jib arm. Cartoni will also showcase its E-CUBE sensorized head for remote control, featuring a balanced double pan bar and monitor deck.

Ross Video has entered the robotics business with its recent acquisition of FX-Motion. The new division, Ross Robotics, will demo the Furio Robotic Camera System, which uses a unique absolute positioning system and rail-based tracking along with lift and PTZ head. It's ideally suited to automated studios as well as virtual set and augmented reality applications.

Shotoku Broadcast Systems will debut its Gemini Pan Bar Control System (PBCS), which is designed for sports and special event productions where cameras are needed, but cameramen can't go. The system merges products from Shotoku's robotics and manual VR tracking lines to provide a remote pan/tilt head that can also function as a manual head. Also new from Shotoku is the latest version of its TR-T touch control system.

Telemetrics has redesigned the EP5 Televator to offer greater speed and travel range along with a wider range of installation options. The unit's floor, flex track and now ceiling-mountable configurations make it ideal for a wide range of production applications. Featuring quiet operation, the remotely controlled motorized telescoping tripod offers the benefits of pedestal height control as well as an auxiliary control serial interface and positional servo control.

Shotoku TR-T Touch Control SystemVinten Radamec will introduce a pair of heavy-duty advanced technology robotic pan and tilt heads, the FH-145 (robotic or manual control) and the FHR-145 (robotic-only control), incorporating the company's new ICE (Intelligent Control Engineering) technology. The new heads can carry payloads of up to 145 pounds. The company will als introduce the FHR-35 remote pan and tilt head, a compact robotic head for locations where a pan and tilt head must be as unobtrusive as possible. The Fusion FHR-35 supports loads of up to 35 pounds, and incorporates ICE technology.

3Ality Technica will introduce specially designed and approved top and right-side body replacement panels for the Sony PMW-F3 camera. They're fashioned from 6016 billet aluminum and turn the light-duty F3 into a ruggedized professional imager, with many 1/4-inch and 3/8-inch standard mounting points. The retrofit panels replace the built-in handle with a strong, low profile top surface with provision for a removable handle system.

ARRI will unveil a new adapter plate (Adapter Plate C300) that allows existing accessories to be used with the Canon C300 4K camera. Also look for ARRI's matte boxes, follow focus units and handgrips, which enhance the functionality of the C300 in a variety of setups, including handheld and studio modes.

K-Tek will introduce an iPhone camera case for 4 and 4S iPhones. It's designed to allow the iPhone to be mounted on K-Tek's range of Tadpoles (mini camera poles), or other devices via a pair of threaded 1/4-20 holes. The machined aluminum case gives a solid foundation for iPhone 4s and 4Ss when used on tripods and poles. Also new from K-Tek is the Norbert Sport Jr., the smallest member of the Norbert camera mounting system family. It's designed for use with smaller cameras, such as the GoPro single camera and the GoPro 3D system.

OConnor Engineering will introduce its Camera Baseplate, which is designed to adapt small- to medium-sized digital cinema cameras to the multitude of standard camera accessories available in the professional cine marketplace. The device provides a sturdy camera platform that's engineered to allow optical axis centering of the lens to the camera sensor, and provides the ability to interface with standard studio bridgeplates for setups with large and heavy zoom lenses.

Autoscript has partnered with Teleprompting Techniques to offer a professional prompting app for users of the iPod, iPad and iTouch. PicoPrompt is available via the App Store, along with Picoscroll, a free scroll app. The company will also offer a scroll control and a connector for the i-Series range. Booth visitors should also look for a new upgrade to Autoscript's WinPlus software that allows producers to select and send single stories or complete run orders from the studio to a journalist or presenter's i-Series device anywhere in the world.

Listec Teleprompters will demonstrate its new Listec Promptware PW-04, a "mini" prompter that turns a smartphone, iPod touch, or similar device into a professional prompter. The company will also showcase a slew of new prompters, including a model for tablets and Steadicam.

QTV Autocue will premier its 22-inch HD/SD SDI Teleprompter talent feedback monitor, a new and larger prompter talent feedback monitor with large screen, native HD/SD SDI support and a secure mounting system. In addition, the company will introduce its Digital Teleprompter tally light that displays the camera number and instantly changes from red to green when a camera goes on air. Also new are USB prompter hand and foot controls.

Petrol Bags will introduce its Rolling DigiSuite DSLR camera case, a semi-hard suitcase-style carrier that features a built-in wheel and tote assembly, as well as a central compartment contoured to fit up to two DSLR cameras with lenses attached.

Also new from Petrol is the Soft Tripod Bag for transporting full-size tripods. It's lightweight, and constructed of durable, water-resistant black nylon and accommodates a Sachtler FSB 18 or similar sized tripods.