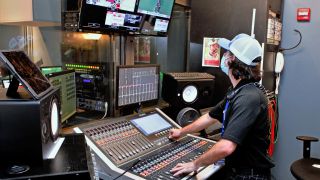 DENVER—As the associate broadcast engineer for Altitude Sports/KSE Media and support venue operations—as well as Altitude TV at The Pepsi Center and Dick’s Sporting Goods Park in Colorado—I have been mixing live shows for five years. I’m now an engineer in broadcast with a focus on audio.

Last year, Kroenke Sports & Entertainment acquired a Calrec Brio36 digital audio console to function as the heart of our TV broadcasts for the Colorado Mammoth lacrosse team for venue’s Jumbotron and broadcast. When COVID-19 hit, we went from managing one game at a time to potentially doing up to three at once because the Colorado Rapids (MLS), Avalanche (NHL) and Denver Nuggets (NBA) would be returning once major league sports started up again. With the I/O combined using our Hydra, local Brio inputs and the Br.IO, the Brio36 was the obvious choice for our new multishow needs.

BACK IN THE GAME

The Rapids were the first of the KSE teams to return to play. To produce the Rapids’ second screen experience during the “MLS Is Back” Tournament, we used the Brio36 to mix and manage a myriad of sources from inside and outside The Pepsi Center. This part of the production included live interaction and commentary from Rapids talent, guest appearances with Rapids alumni, fan interviews, produced content and live fan interaction and social engagement. The experience also coordinated virtual fan watch parties to support supplemental interaction with the ESPN and ESPN2 broadcasts.

KSE has never produced a show like this before. We used seven of our video edit suites to bring “Zoom rooms” into our video router, switcher and console via AES. A specific mix/minus was sent back to each one and incorporated the producer source to simulate an IFB situation through Zoom return audio. Talent mics were sent to QC stations around the control room so that we could talk with talent off-air and we also set up a conference bridge using our TIFF lines to bring our remote stage managers into the mix as well. All sources were managed by the Brio.

Furthermore, we kept the number of crew to a minimum in the main control room (my audio booth is isolated, so we had no issue with my position). The producer was in a separate room with his own comms and multiviewer. For our Zoom rooms, we had remote “stage managers” who would give cues on when we were going to them live.

Social media interaction on our broadcast was moderated remotely and the stream was picked up by a remote website tech who would push the video live to the Rapids’ YouTube channel. For on-site personnel, we built a custom “ultraviolet baking system” that stored the headsets. removing the bacteria on them after each use. We all wore masks during the entirety of the production while staying in designated boxes at our KVM station.

The Brio made this possible because of its incredible flexibility in terms of fader placement and movement, ease of creating mix/minus for each Zoom room and the immense I/O flexibility our system has.

With the way we have the board configured, we are ready to take on future second screen experiences with the Colorado Rapids heading into the regular season and are capable of running simultaneous shows for the Colorado Avalanche—if/when we encounter a double header.

Nick Bogannam is a graduate of Full Sail University with a Show Production and Live Touring degree. He is the associate broadcast engineer for Altitude Sports/KSE Media. He can be contacted at nicholas.bogannam@teamkse.com.