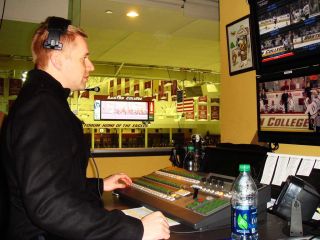 Housed in Conte Forum, the indoor arena for hockey and men’s and women’s basketball, the control room is connected to Alumni Stadium via fiber for football coverage. The Athletics Department purchased its Granite last summer through Access AV in Concord, N.H., and installed it for the first home hockey game of the season October 2012.

A typical football production uses a combination of up to four tripod and handheld cameras, while basketball and hockey can have as many as five cameras for game coverage and replays. Girard said they sometimes use video feeds from production trucks producing the game for broadcast for additional coverage.

With no full-time technical director on staff, Boston College relies on Fluent Macros to provide a look for replays, sponsorship bugs, score tickers and other on-screen graphics and transitions. Girard estimated there are 800 stored macros, with up to 100 used during each game.