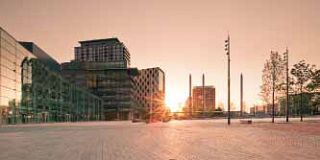 Blue Peter is the longest running children’s television program in the world. Over its 53-year history the BBC magazine show has chronicled the changing times for its young viewers – alongside cozier items like making Christmas decorations out of toilet rolls. I t ’s seen some significant changes itself; the latest of these came on September 26, when it was broadcast for the first time from a new studio in the MediaCityUK (MCUK) development.

Image courtesy MediaCity UK & Darren Harley MCUK is a private venture backed by property developers Peel Holdings, which has many interests in the northwest of England, including the Trafford Centre in Manchester, Salford City Stadium, and Liverpool’s John Lennon Airport, as well as internationally.
The purpose-built broadcast complex has been rising out of the former docklands at Salford Quays in Greater Manchester since 2007. It provides a new home for both the BBC’s local TV and radio operations in the northwest and the public broadcaster ’s production and technical departments from London.

Media is a growing part of Peel’s business – earlier this year it secured a 71.1 percent stake in the Pinewood studios group – and MCUK is the centerpiece of its broadcasting and film portfolio. Specialist subsidiary Peel Media is overseeing the project, which has cost £650 million so far.

MCUK began operations in 2007 when film and TV production facility the Pie Factory opened. Since then, the core of MCUK has been built on the former North Wharf of the Manchester Ship Canal, which is another Peel holding. Of the 200 acres set aside for the proposed media-city-within-a-city, 36 now house TV and radio studios, general media facilities and offices.

Work on this first phase finished in May, when the first tenants started moving in. Production companies are taking up residence in The Greenhouse office block, while the University of Salford’s media and technology building was ready for the start of term at the beginning of October.

After a long period of “will-they-won’t-they?” commercial network ITV is to move its Manchester operations – still better known as Granada TV – to MCUK. These include the set of the long-running soap Coronation Street: Cast members “broke ground” on the new location during September.

The BBC has three buildings at MCUK housing program production offices, plus some broadcast facilities (which will be covered in a later installment of this feature series). A public service broadcaster taking space on a commercial development has raised concern. The decision to move BBC Children’s and Learning, BBC Breakfast, BBC Sport, Radio Five Live, and parts of BBC Future Media and Technology to Salford has been widely criticized.

For large-scale and general purpose TV production, the BBC is using facilities in the focal point of the current MCUK sites, which the main Studios block. It houses seven HD studios; four are for production, three are presentation areas.

Each studio has its own technical gallery, with separate facilities for vision/production and audio. There are also two specially designed audio studios, one of which is the recording and rehearsal space for the BBC Philharmonic Orchestra. This studio includes camera wall boxes, so that it can be used for TV work.

The building, known behind the scenes as Block D, also contains the Central Technical Area, Master Control Room, eight post-production suites, and an ingest area. The TV studios carry the prefix HQ, after the specific post code for The Studios center, M50 2HQ.

The TV studios were built by systems integrator TSL and, along with the post and technology support facilities, are run on a day-to-day basis by SIS in a joint venture with Peel Media.

The BBC is committed to using two medium-sized studios on an ongoing basis. HQ2 is a nine-meter high studio currently used for recording the panel game A Question of Sport. HQ3 is where football highlights programs Match of the Day and Football Focus, as well as Saturday afternoon results round-up Final Score, are broadcast live.

HQ1, described by TSL’s chief technology officer Julian Knight, as a “humongous” space, and HQ4 are available for general hire but are contracted to the BBC at the moment. At 12,000 square feet, HQ1 is – as Julian Boden, Director of Engineering for MediaCity Studios Limited (MCSL) observes – amongst the biggest TV studios in Europe. With no sets or seats installed it is cavernous; something that is not diminished much even when it is kitted out and hosting an audience.

Boden comments that HQ1 was “designed very much for entertainment” work and follows a traditional blueprint. This involves a saturated lighting grid mounted at a height of 15 meters. According to Knight, this grid allows 16:9 widescreen pictures to be shot without the lights coming into view. The BBC has used this studio for variety show Tonight’s the Night. Boden says there is interest from both ITV and Sky.

Not all studios at MCUK have a permanent lighting rig. Among these is HQ4, which, at the time of TVT Europe’s first visit to Salford, contained a set for the new Cbeebies (the BBC’s digital channel for pre-school children) show Justin’s House. HQ5, 6 and 7 are smaller presentation studios. The first two are committed to CBBC, the digital channel for older children, and CBeebies; the latter is dedicated to Blue Peter.

The whole of MCUK was recently awarded the Carbuncle Cup for containing the ugliest new buildings in Britain. The development, and The Studios block in particular, is not pretty, with not even the brutalist character of BBC TV Centre in London. Still, it is functional; consisting of glass and, as Knight observes, “a phenomenal amount of concrete”.

The Studios building itself is asymmetrical but does have a central point, with an internal road running through it so trucks carrying scenery can reach each studio. The structure is based on the principle of radial spokes, with the entire MCUK estate pointing towards the Lowry Center. (This is the arts complex named after Salford-born painter LS Lowry, on the opposite bank of the North Bay; an inlet of the Ship Canal.)

The design of the workflow and technical infrastructure was set down in a Stage D Baseline Specification by TSL. It was then approved in September 2008 by Peel Media and BBC Workplace, the department that manages the Corporation’s corporate properties.

Although the Studios are intended for general hire as well as specific BBC work, Knight’s experience of working on projects for the Corporation, including facilities at TV Center, gave TSL a good grounding for its work on MCUK.

Knight says the entire site was designed to be 3G-SDI from the outset. This has allowed 3G -ready vision mixers and cameras – Sony MVS-8000Gs and HDC1500R/Us – to be installed, with the capability to produce 1080p/50 programming if required.

Avid Interplay is the main media and asset management server platform, which Knight says has been installed to “meet all future needs”. Avid’s DNxHD 120 codec was originally specified to deal with all HD program requirements but, according to Knight, a “portfolio of codec formats” is also available. These include the new AVC intra 100 for file-based delivery. In our next issue, we take an in-depth look at the studio vision galleries, plus the automation, media asset management, and networking systems used in the Studios block.