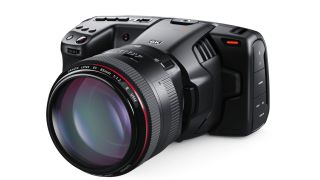 FREMONT, Calif.—Blackmagic Design has announced that it has given its Pocket Cinema Camera 6K a new studio camera software update to enable it to be used as a studio camera for live production. In addition, the company has announced a price drop of the camera.

The software update allows the Pocket Cinema Camera 6K to serve as a studio camera when used with the ATEM Mini switchers. Video and control is handled via the HDMI connection. The camera’s record light is able to serve as a tally light, turning on when on-air. The ATEM Software Control camera page has a camera control unit (CCU) style interface for adjusting and matching cameras. Additional controls are available for color tint, focus, gain and shutter speed. Users can ISO record Blackmagic RAW in the camera for editing later.

Blackmagic Design is now offering the Pocket Cinema Camera 6K for $1,995, $500 less than its previous price, according to the company.