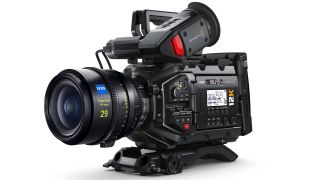 FREMONT, Calif.—Blackmagic Design has upped its resolution game, announcing the debut of a new URSA Mini Pro camera that can shoot up to 12K resolution.

Unveiled during a livestream event with Blackmagic CEO and founder Grant Petty, the Blackmagic URSA Mini Pro 12K features a new sensor with native 12,288x6,480 resolution, which equates to 80 megapixels per frame. The Super 35 sensor has 14 stops of dynamic range and a native ISO of 800. With the camera, users can shoot natively in 4K, 6K, 8K and 12K.

Additional features of the URSA Mini Pro 12K include interchangeable lens mount, with PL, EF and F mounts included; the ability to shoot up to 60 fps in 12K, 110 fps at 8K and 220 fps at 4K; dual card CFast recording at up to 900MB/s; SuperSpeed USB-C for recording to external disks; DaVinci Resolve Studio for post-production; and compatibility with Blackmagic URSA Mini Recorder.

“With Blackmagic URSA Mini Pro 12K we have advanced imaging technology into a new generation where new styles of shooting will be possible,” said Petty.

The UltraStudio Monitor 3G and UltraStudio Recorder 3G are Blackmagic’s new, separate capture and playback systems with 3G-SDI and HDMI connections, plus high-speed Thunderbolt 3 technology. Blackmagic designed the products to be portable, pocket-sized and operable from a computer’s battery or power source. The models also support all common SD/HD video formats up to 1080p60; offer uncompressed and compressed 10-bit 4:2:2 YUV or RGB quality; support DaVinci Resolve and other video software; and can download Developer SDK for free. Both models are now available at a price of $115.