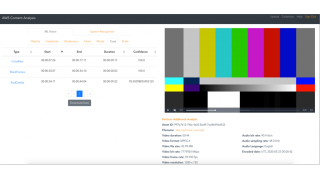 With these features, users can execute workflows such as content preparation, ad insertion and add “binge-markers” to content at scale in the cloud. Examples of this include a short duration of empty black frames with no audio to demarcate ad insertion slots or end of a scene, as well as identify the start of end credits to implement interactive viewer prompts like “Next Episode.”

In addition, the ability to detect shot changes from one camera to another can enable the creation of promotional videos using selected shots, generate high-quality preview thumbnails and insert ads without disrupting the viewer experience. SMPTE color bars can also be detected so that they can be removed from VOD content, or to detect issues such as loss of broadcast signals in a recording.

Amazon says that the Rekognition Video provides the exact frame number when it detects a relevant segment of video. It handles various video format rates, such as drop frame and fractional frame rates. Utilizing the device allows for the automation of tasks or a reduced review workload for human operators, says Amazon. The company only charges for the minutes of video analyzed.