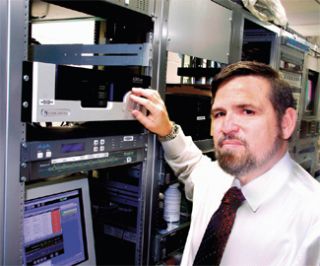 Jim Stanley
LOUISVILLE, KY.
Shortly after WLKY-TV signed off its analog transmitter for the last time, a problem immediately became apparent. Viewers who had contentedly watched the station’s analog broadcasts for years were now up in arms as they began viewing our digital channel exclusively. The pictures looked great, but program audio levels varied widely—one show would be whisper soft; the next would be blaringly loud. Transitions between programs and local commercial breaks made the problem even more noticeable.

Phones were ringing off the hook, and e-mail in-boxes filled with complaints; something had to be done, and quickly. After reviewing all of the available equipment in the marketplace, our answer was to install the AERO.air audio processor from Linear Acoustic.

EVERYTHING IN ONE PACKAGE

Another plus is that the processor accommodates EAS operations as well. When activated, the main program audio is muted, and EAS programming bypasses the processor and is sent to the left and right audio channels. The unit’s EAS/AUX inputs accept either analog or digital audio, making the purchase of an A/D converter for older EAS decoders unnecessary.

Installation of the AERO.air was fast and straightforward, in no small measure because of the excellent user guide that accompanied the unit. Aside from the clear and concise explanations of the device’s various functions, it includes drawings of representative setups for major television network affiliates. This is a tremendous help in visualizing just exactly how best to install the processor in a station’s signal path.

While there’s a very wide range of adjustment options available on the processor, there aren’t any “factory adjustments” that are hidden from users. That said, the processor comes with a number of factory-programmed processing presets that most engineers will find very satisfactory, and which make initial setup and operation a breeze.

Our station initially chose to go with the “Television 5-Band General” setting, and after some critical listening, chose to modify the preset parameters slightly in order to make the sound a bit more “open.”

We encountered only a slight problem with the new processor. Shortly after it was installed, we noticed very brief audio dropouts in our programs being carried by a local cable company (our off-air audio appeared to be fine). The folks at Linear Acoustic were quick to help us, and their engineers isolated the problem to a plant reference issue. Making the changes they recommended cleared the problem immediately.

All-in-all, we couldn’t be happier with the performance of our AERO.air, or the support we have received from Linear Acoustic. The processor has proven to be reliable and easy to use, with more than enough flexibility to accommodate both present and future needs.

Jim Stanley is director of engineering at WLKY-TV in Louisville, Ky. He may be contacted atjwstanley@hearst.com.

For additional information, contact Linear Acoustic at 717-735-3611 or visitwww.linearacoustic.com.