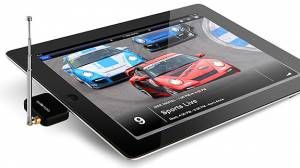 Elgato this week unveiled the new and improved EyeTV Mobile, which is a completely redesigned version of its previous DVB-T TV tuner. The unit is now even smaller and is designed to plug into the dock connector of the iPhone or iPad. Designed for efficiency, the new and improved chip set is built for performance and is much smaller, making it about half the size of other TV tuners built for the dock connector. And (finally) Elgato also has a solution for Android as well: the EyeTV Micro.

While the iOS platform has seen a good lion’s share of accessories for picking up live TV, and Elgato is certainly committed to extending the options for iPad and iPhone, it also announced this week the new EyeTV Mirco, built especially for Android. The unit brings DVB-T reception and connects to the Micro USB port on many Android tablets and smartphones. The Android version of the EyeTV Micro also can be connected to a standard Mac or PC computer, via the included USB adapter cable, for even more flexibility. The EyeTV Micro will be available starting this month for Android devices, which include a dual-core CPU, NEON support as well as Android 4.0.3 Ice Cream Sandwich. Users can download the free EyeTV Micro app via the Google Play store on their device.

Both the iOS EyeTV Mobile and the Android EyeTV Micro feature different aerials so that users can get the best reception no matter where they are — at home, on the road or anywhere. While the Android EyeTV Micro offers solid TV reception over-the-air with no Internet required, the iOS EyeTV Mobile does go a bit further with its feature set. Using the free app available from iTunes, it’s easy to watch, pause, rewind and record live TV. Interested in a show you just discovered? Hit the record button, and the show is recorded right to the internal memory of the iPhone or iPad. Being able to time shift a program and watch at a later date is a compelling option and is especially handy on the go using the iPhone 4S.

Elgato has been committed to the over-the-air option with its products, and the redesign of the iOS unit and introduction of an Android version shows the company is in it for the long haul. It also demonstrates how there may be a lot of momentum left for over-the-air transmission. As the Dyle rol-lout ramps up over the next few months, over-the-air DVB-T transmission may be making a comeback and could be a hit with consumers in the coming months.