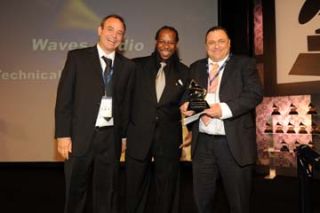 KNOXVILLE, TN, February 28, 2011 — During this year’s GRAMMY® Week celebration, Waves Audio was presented with a prestigious Technical GRAMMY Award, honoring its innovative professional music production software. The special invitation-only ceremony was part of The Recording Academy®’s Special Merit Awards, which took place in Los Angeles on Saturday, February 12, 2011, at the Wilshire Ebell Theatre. A formal acknowledgment was also made during the 53rd Annual GRAMMY Awards telecast, which was held at STAPLES Center on Sunday, Feb. 13, 2011, and broadcast live on CBS.

This Special Merit GRAMMY is awarded by vote of the Producers & Engineers Wing® Advisory Council and Producers & Engineers Wing Chapter Committees and ratified by The Recording Academy’s National Trustees. The award is presented to companies that have made outstanding contributions of technical significance to the recording field. With this presentation of the Technical GRAMMY, Waves joins a prestigious list of previous recipients which includes such well-known names as Apple, Sony/Philips, Shure and Yamaha.

“We would like to thank the Recording Academy for this tremendous honor you have bestowed upon us,” stated Gilad Keren, founder and CEO of Waves Audio, addressing the crowd at the ceremony on Saturday, February 12, 2011. “We would also like to thank the Board of Trustees and the Producers and Engineers Wing for recognizing our contributions of technical significance to the recording field. Additionally, on behalf of everyone at Waves, we would like to thank all of our users, beta testers and colleagues for their loyalty and support over the years. What started as a dream 30 years ago has grown into a vibrant company with hundreds of products and over 100 talented employees. We would like to thank our staff, past and present, whose tireless dedication continues to enable us to make the tools that are utilized by many of you in this room. We would especially like to thank all the producers and engineers who have collaborated with us in making this all happen. Everyone at Waves would like to recognize the late Michael Gerzon as a mentor and a friend, whose important industry contributions and technical documents continue to inspire us to this day. Thank you for this prestigious award.”

Meir Shaashua, co-founder and CTO of Waves Audio, echoed Keren’s statements: “On behalf of everyone at Waves, we are proud to accept this award. It is such a beautiful experience to be part of the 53rd Annual GRAMMY Awards, celebrating along with our colleagues and peers. Waves has accomplished a great deal in the two decades since our founding, and we look forward to furthering our contributions as the years progress.”