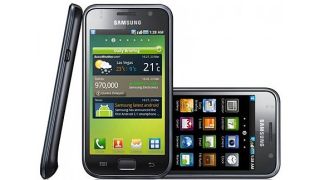 Dyle, the initiative to incorporate live TV chipsets into mobile devices, is finally in launch mode as of this week. The country’s fifth largest phone carrier, MetroPCS, added to its wide array of options with the launch of the Samsung Galaxy S Lightray. This is notable because this is a smartphone that actually has live TV built-in. Will consumers adapt to this new breed of phones with built-in tuners? MetroPCS and Samsung, along with Dyle, are betting on it.

The Samsung Galaxy S Lightray does come at a steeper price. In fact, the smartphone is about $200 more than a comparably priced phone in its feature range. The unit has a built-in extendable antenna for picking up live local TV stations, and the best part is that the shows do not use the phone’s 4G or Wi-Fi; it just picks up channels, free and clear.

As more and more providers clamp down on data and continue to squeeze profits out of smaller chunks of bandwidth with new caps, the Dyle technology allows watching unlimited television around the clock. The handset is based on the Android operating system and features Google Play for downloading apps. Customers launch the app for viewing via Lightray’s application menu and then choose a local station to view. The Dyle website has an interactive map for finding out what stations are available in your area. Just load up the webpage, type in your zip code or let the browser find out where you are via data location, and you’ll be presented with a list of local affiliates broadcasting Dyle-compatible programming in your area.

The actual phone itself is not exactly cutting-edge. It runs on Android 2.3 Gingerbread, which is almost two years old by this point, and the phone works via a 1GHz single core processor. The challenge will be to keep the cost down to incorporate the chips required to pick up local signals. Since the technology could add a few hundred dollars to the final phone price, it makes sense that it will first launch on lower-end smartphones and then be available with this new feature to consumers who want them. If a top-of-the-line phone with all the bells and whistles, and coming in at a premium price, also then adds $200 with the addition of a Dyle receiver, the technology may not get off the ground in the first place.

While Dyle is working for complete U.S. coverage, it doesn’t cover every city currently and is focused first on major cities instead of rural areas. And even in a city-by-city basis, not all network affiliates can broadcast to Dyle devices. But Dyle is certainly in it for the long haul, and this MetroPCS phone could be an important first step.

The question remains, and it could be the elephant in the room: Do consumers want this new technology? It’s an interesting mix of old-school antenna transmission coupled with the latest in mobile TV technology via smartphones and tablets, but ultimately consumers will need to pay a premium to join in. They may not be used to extending an antenna and having to position themselves near a window or go outside (Dyle’s units need good positioning just like any other antenna-based device), but the fact that they can watch network television content all day for free is bound to be a refreshing change.

Dyle will continue to roll out more devices by year’s end, but MetroPCS will be an important test, a test to see if consumers are willing and able to warm up to the bold new era of antenna-based live television on smartphones.