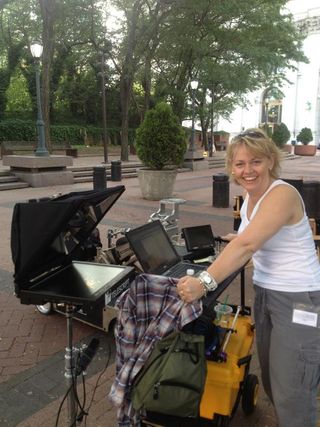 User-Friendly System Provides Flexibility and Resilience in an Intuitive Package

SHELTON, CT, DECEMBER 12, 2013 — For Stacey Torello, owner and operator of Precise Prompting, a full-service teleprompting company, conveying her clients’ messages flawlessly is the key to her company’s success. Whether it's a live television broadcast, corporate event, film shoot or a taped field piece, Torello relies on Autoscript, part of Vitec Videocom, a Vitec Group company, and a world-leading teleprompting company, and its +WinPlus+Prompting Software.

Autoscript’s top-notch customer service and ability to trouble-shoot on the fly is another reason that Torello continues to turn to Autoscript for her prompting software needs. Torello, who has extensive experience with game shows, talk shows, political speeches, movies and sporting events, including Showtime’s live boxing coverage, started using Autoscript’s +WinPlus+ in 2009.

“+WinPlus+ is great when it comes to live sporting events like boxing,” says Torello. “With +WinPlus+, I can edit and prompt at the same time, which is a great feature; one that I have not seen in other programs. If I’m in a live situation and a producer needs me to change copy, that producer can be typing while I’m prompting. That’s a huge advantage.”

+WinPlus+ is a Windows-based software package that adds the ease of "point and click" to an intuitive on-screen edit display. It can provide standalone prompting for both presentation and general production, in the studio or on location. With more than 10,000 systems in daily operation around the world, +WinPlus+ is the most widely used prompting application on the market. +WinPlus+ can be interfaced with all the leading electronic newsroom systems. Designed and used by prompting experts, the software offers the ability to control the run order and edit anywhere within the script, even when scrolling the on-air story, leaving the prompt output unaffected. This adds resilience to the overall system.

“Not only is Autoscript’s +WinPlus+ software great; the company’s customer service is excellent as well,” adds Torello. “Whenever I call to speak with my customer service rep, she’s very helpful. She immediately knows what I’m talking about, and if I have an Internet connection she’ll just sign into my computer, go over my system, see what the problem is and immediately fix it. She is yet another reason why Autoscript is my obvious choice for prompting.”

Autoscript is the world leader in the prompting industry, providing professional teleprompting equipment to broadcasters across the globe. Established in the UK in 1984, with headquarters in the UK and the US, Autoscript designs and builds innovative hardware, PC cards and software to meet real world needs and continually enhance the production process. A prime example of this is Autoscript’s latest product, the E.P.I.C. (Enhanced Prompting Information Centre), an all-in-one prompter display and on-air talent monitor that vastly simplifies studio equipment, reduces power consumption and enables easier location prompting. Autoscript is a member of the Vitec Group.

Vitec Videocom brings together some of the most respected, most innovative and most sought-after brands in the industry: Anton/Bauer, Autoscript, Camera Corps, Litepanels, OConnor, Petrol Bags, Sachtler, Vinten and Vinten Radamec. It acts as an endorsing brand for these market-leading broadcast, film and pro video products, encouraging multi-brand system sales and simplifying the way that customers worldwide do business.

Vitec Videocom – advancing the quality and science of media production.