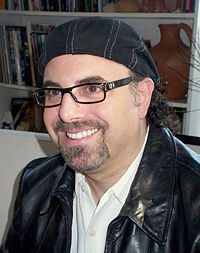 David Helfand Fill an entire hall full of video and film editors and what you'll have is an audience eager to hear Emmy-nominee David Helfand talk about the balance between the art and the craft of editing for television.

Helfand, most recently nominated for his work on the Showtime series "Weeds," is slated to deliver the Post|Production World Conference keynote address, Monday, April 20, 10:30 a.m.

The conference, an established favorite at the annual NAB Show, offers artists, editors and other post-production creatives an opportunity to sharpen their skills with seminars, courses and certification programs keyed to the applications and systems they use professionally. The conference is sponsored by Adobe.

At least as important, however, is the opportunity to meet and swap tales with their peers in the industry, hailing from a broad range of work experiences. Boutique editorial shops, big facilities and independent freelancers will all be well represented.

Editors and other post-production staffers have traditionally tread a fine line between the esoteric and the practical, anxious to understand the subtleties and nuances of storytelling — and yet no less eager to hear "war stories" from established industry veterans. In David Helfand, conference attendees will find a seasoned pro with stories to tell.

For generations raised on desktop computer-based film and video editing, it's sometimes hard to imagine a time before drag-and-drop editing. And yet the early history of television editing, prior to the advent of digital circuitry and fast electronic storage, saw a chaotic parade of inventions and schemes intended to apply the principles of flatbed film editing to the magnetic and electronic universe of video recording. Helfand cut his editorial teeth during these challenging times, embracing the fledgling technology of one such scheme – the Montage Picture Processor – so thoroughly that he became an instructor for the system.

His exposure to those pioneering technologies — and to their well-connected adherents — soon led to opportunities for work on what was then the "holy grail" of television editing, episodic programs and series. After honing his skills on a number of programs in the 1980s, Helfand found an opportunity in 1990 as an assistant on HBO's popular "Dream On" series, one which turned into a five-year editing stint and culminated in three Cable ACE Award nominations and one win. Within a few years he was cutting such popular series as "Friends" and "That '70s Show."

Armed with skills in both episodic television and, in particular, comedy, Helfand has clearly found a specialized calling, one which earned him the opportunity to edit the quirky "Weeds" for Showtime, where he picked up two Emmy nominations.

But as for David Helfand the technologist, well, old habits die hard. Helfand continued his association with Montage, consulting on its second-generation digital system, and contributed to Lightworks' proprietary "Heavyworks" multi-camera editing system. And who would know better about multi-camera television editing than – David Helfand?