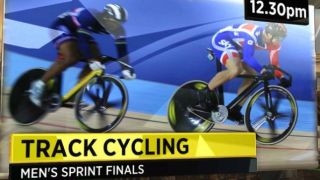 Vizrt is supplying BBC Sport with its HD graphics engines to deliver the broadcaster’s live television graphics for the London 2012 Olympic Games. Working in conjunction with Vizrt are two London-based graphics providers — Mammoth Graphics and deltatre. The two firms are using their Vizrt expertise to design, operate and manage the delivery of the live HD graphics operation, which is based within the broadcaster’s studio at the International Broadcast Centre (IBC) in London.

Two Trio/Engine combinations are dedicated to graphics creation for BBC-1, while two more combos support different events being carried on BBC-3, a channel targeted to a relatively younger demographic. The remaining two Trio/Engine combos serve as spares for failsafe redundancy. All of the Vizrt systems have access to all live video feeds coming into the IBC from all the venues, and many live graphics integrate live video.

All graphics and templates have a unique BBC style created in advance using Viz Artist design software, including full-screens, lower thirds and side panels, as well as a visually riveting 3D “medals table” that illustrates the medals count by nation. Most of the graphics for nearly three dozen sports — roughly 2500 events — are live and coming from the Vizrt boxes.

Mammoth Graphics collaborated with another live graphics vendor, Kenziko, to create a bespoke device called KineTrak, which debuted at the London Summer Games. KineTrak detects and interprets human movements to allow on-camera presenters to control and manipulate the presentation of live graphics.