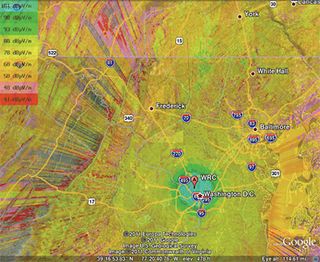 In previous articles, I've described Sid Shumate's efforts to fix programming errors in the Longley-Rice irregular terrain model (ITM) that's been the standard for broadcast coverage and interference studies beginning with the creation of the original U.S. DTV Table of Allotments.

In addition to fixing computational errors, he has modified the prediction of both "line of sight" and obstructed paths to include absorption and scattering in the clutter canopy. As you will see, these changes result in dramatically different coverage predictions from those obtained by using ITM Version 1.22.

This year, Shumate has published the source code for ITWOM Version 3.0 in comments filed with the FCC in Docket 10-152, "Establishment of a Model for Predicting Digital Broadcast Television Field Strength Received at Individual Locations."

He has also worked with John Magliacane (KD2BD) to incorporate ITWOM 3.0 in Magliacane's SPLAT! RF propagation, mapping and analysis program. Instructions on how to add ITWOM 3.0 to SPLAT! 1.3.0 are on the SPLAT! Website. Work is underway on SPLAT! 1.4.0. I used a pre-release version of SPLAT 1.4.0 for the maps in this article.

Fig. 1: ITM predicts very strong signals (around 100 dBμV/m) even outside the Washington, D.C. Beltway. Figures 1 and 2 show the predicted field strength of Washington, D.C.'s WRC-TV at a 30-foot receiving antenna height using FCC database parameters and the more accurate Dielectric antenna azimuth (essentially omnidirectional) and elevation patterns. Detailed maps, including a Google Earth KMZ file with both the ITM and ITWOM overlays, are available at xmtr.com/rf213/. The differences are striking.

First, in Fig. 1, ITM predicts very strong signals (around 100 dBµV/m) even outside the Washington, D.C. Beltway.

In Fig. 2, the ITWOM map, the area inside the Capital Beltway has very strong signals, but the field strength drops off much more rapidly before reaching a field strength of about 90 dBµV/m, around and just outside, the beltway.

Another major difference is that ITWOM shows field strength behind terrain where ITM predicts no signal greater than 41 dBµV/m. As a case in point, look at the area along Interstate 81 near Maugansville, Md., which is north of Hagerstown. In the ITM analysis, mountains block WRC-TV's signal. However, during a visit to the area, I found that I was able to receive WRC-TV with an indoor antenna on the third floor of the Microtel in Maugansville, which indicates ITWOM's prediction of field strengths in the 58 to 68 dBµV/m is closer to reality.

At this point, you are probably asking why does ITWOM give such different results than ITM? You can read the complete explanation, along with the mathematics behind it in Shumate's comments in the FCC proceeding. The documentation stretches for 478 pages, so I'll focus on one area that I found has a significant effect on results—clutter. Signals drop off so quickly over what at first glance appears be an unobstructed path, as ITWOM calculates clutter absorption loss as the signal passes through a clutter height of 25.2 meters (based on ITU-R P.1546-2). The grazing angle and path length into and through the clutter canopy and frequency determine the added loss.

Because ITWOM makes a number of changes in how loss over obstructions is calculated, it's tough to pick out one reason for the extra signal strength behind obstructions without a more rigorous mathematical analysis than I was able to do for this article.

Fig. 2: In this ITWOM map, the area inside the Capitol Beltway has very strong signals but the field strength drops off much more rapidly before reaching an intensity of about 90 dBμV/m. ITWOM uses the Radiative Transfer Engine (RTE) to calculate loss through the clutter canopy. In addition to absorption loss, the RTE also considers scattering. RF energy not converted into heat is scattered and, in effect re-radiated. The scattering functions moderate absorption loss at certain points in the path. The RTE and its scattering function appear to be one of the reasons why ITWOM predicts stronger signal levels behind terrain.

With the clutter canopy at 25.2 meters, it's reasonable to ask how well ITWOM works in different areas. The WRC-TV study matched my field results at one location, but it isn't clear that ITWOM would work as well in areas where the obstructions don't have a canopy of trees. Shumate warned me about this when I showed him studies I'd done for KNBC in the Los Angeles market, where fires have left the top of the mountains north of the Mount Wilson transmitter site barren.

Over the next few months, I'll dig deeper into ITWOM to get a better understanding how it works in different environments and compare ITWOM predictions with measured field strength. I was surprised to see weak ITWOM predicted signals from an on-channel repeater I'm designing to improve signals in Burbank, Calif. The transmit antenna in this case was 18 meters above ground on a peak with any vegetation around the tower only a few meters high at most. Increasing the antenna height above ground to 28 meters provided results much closer to what I'd expect, with a dramatic increase in predicted signal strength in Burbank. ITWOM changes to a different set of formulas when the transmit antenna is below the canopy height (25.2 meters). Would a change in this value provide more accurate results in some areas?

Now that ITWOM is available for SPLAT, let me know how it works for you!

Comments and questions are welcome! E-mail me at dlung@transmitter.com.