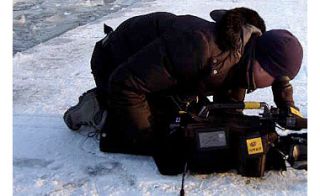 Current base: I’ve been in Beijing for six years.

Current assignments:
Just finished a 30 min piece for CNN’s Revealed show on Olympic snowboarder and gold medalist Shaun White. It was a challenging and nonstop shoot since the producer and I only had four days to get behind-the-scenes material on Shaun. I shot on the Sony EX3, ideal for the crazy schedule and hundreds of Chinese fans going crazy for an autograph!

Have you been busy?
Freelancing in China can be very unpredictable. Usually from March ‘til November I’m nonstop with productions ranging from high end HD to little HDV shoots.

Shooting where?
I average about 5-6 flights a month to different Chinese provinces. Each year I will shoot in 4-5 other countries in Asia.

What types of productions have you mostly shot?
I went on a three-year marathon shooting Megastructures and Man Made Marvels for the Nat Geo and Discovery Channels. For some reason around Olympic time in 2008, these networks couldn’t get enough of tall buildings, fast trains and Mega Olympic stadiums.

Why did you make the move to China?
In 2005 I could see China shaping up to become a superpower and this would no doubt create several opportunities as a cameraman, as all eyes would be on China for the 2008 Olympics. It certainly paid off.

What’s your idea of a luxury shoot?
Luxury shoots in the past have usually been associated with banking clients, with a great selection of 5 star hotels to choose from at the end of a day’s shooting. They also tend to be in exotic places like Vietnam.

A hardship shoot?
Getting paid the normal freelance rate and being asked by a director to climb a crane from the 100th floor of an unfinished building to do an interview with the driver. The climb took 20 minutes up a rickety 50 metre ladder with a Panasonic Varicam in two pieces hanging over my shoulder.

What was your first ever shooting job?
I was 14, running around my Dad’s farm with his little Canon Hi 8, when I stumbled onto the neighbor’s farm being used as a set for a Korean film crew’s Samsung TV commercial. It was meant to represent rice paddies in Vietnam, so I did a little behind the scenes filming until the director yelled out, “stop, go and help with the fog machine.” This was a defining moment for my acceptance into the magical world of film and TV.

Most recent, interesting assignments?
A couple months back I was shooting my first major BBC doco for the Imagine series and was unaware of how controversial it would turn out to be, as it follows the life story of China’s most active human rights artist. I remember getting caught off guard changing filters when the Director said, “quickly get this”, so I ran over with my Sony HDCAM, to capture the artist smashing five meter porcelain vases. The shrapnel flew in all directions, including my head, but miraculously did not hit the lens.

Current equipment you use?
I’m well into all these latest mini HD cameras coming out and am a big fan of the Sony EX1/EX3 and often combine this camera with Sony HDCAM F900R for two camera shoots. I’ve often used the Panasonic Varicam – but my favorite camera is still the Sony F900R. I’m getting pressured by colleagues and clients to use the Canon 5D, but I guess I’m caught in a love affair with Sony. You can’t beat true, uncompressed native HD.

Other gear you have access to?
A lot of equipment in China is “Made in China for China”, so you can expect some product to be dodgy. With this in mind, I’ve spent the past six years building up my kit from regular trips to the UK and Australia. I own a lot of cool modern lighting gear, especially LED lights and the Wally Dolly and Portajib get a good work out.

Most big cameras I can rent in Beijing but (you) need to keep an eye on their track record in the field. It doesn’t make too much sense to buy a big HD camera since every client requests a different format and camera technology is ever changing.

Equipment “wish list”?
My wish list will be almost complete if I can make it one day to that big B&H superstore in New York. They have so many cool gadgets and with most camera equipment, new parts need to be bought. I have my eye on the mini Steadicam Glidecam 4000, as I recently used it on a concert recording all over Europe.

What piece of gear do you wish someone might make?
I hope Sony will deliver a new lens that can compete with all the excitement over the Canon 5D. I love shooting hand held and the Sony F900R is perfect, compared to the flimsy Canon design.

Best thing about your job?
Freelancing is most rewarding when the work’s flowing in and it’s so busy that I can send other jobs to my good friends in the game. As a cameraman, I’m fortunate to travel all over the world and get paid for doing something I love.

Worst thing about your job?
I spend a lot of time on the road and value my current relationship with my girlfriend Frances in Beijing. This can be difficult, as I don’t get to spend as much time as I would like with her and a question mark hangs over the future of my career when a family comes along.

Dullest assignments and why?
Live shots off a balcony in Beijing would have to be the dullest as there is definite repetition in a single shot that has no creative input. Each time North Korea shakes the world, the duller my assignments are.

Hairiest/scariest assignments and why?
I would have to say the Megastructure shows are the scariest, as I film them in the most sketchiest work environments in the world.

A construction site in China is a real eye opener. They hold up a sheet of cardboard when welding and walk on bamboo scaffolding 80 floors up. The hairiest shot is when I’m following a construction worker high above the Guangzhou TV tower in a storm and he turns around to say to me in Chinese, “Careful, you are just about to walk into that hole.” Just as well my Chinese is at a useful level!

How much 16:9 do you shoot?
Almost every production I shoot is in 16:9. It’s been a good three years since I picked up a DigiBeta SD.

What country would you most like to shoot in?
I’m waiting for a chance for a director to take me to Tibet or Mongolia. I miss shooting in large open spaces, as most of my career has been spent in densely populated areas.

What’s your taste in music?
I listen to my iPod non-stop when flying to each location. I was always a fan of British rock but as I get older I prefer a simple acoustic artist like Ben Harper.

Favorite group?
Still a big fan of Radiohead and U2.

Favorite food?
Everything Asian rocks! Thai and Vietnamese food are awesome. Come to Beijing, all their Asian food is delicious and cheap!