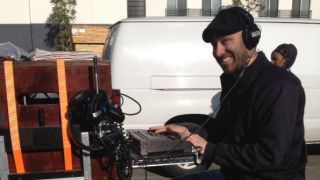 Stickman Sound owner and sound supervisor Fernando Delgado is a reality television audio expert. With a wide range of shows in production, including "Design Star" on HGTV, "The Devil's Ride" on the Discovery Channel, "Top Shot" on the History Channel and "UFC Presents The Ultimate Fighter" on FX, Delgado and his crew have come to rely on Sound Devices and its digital recorders, mixers and accessory products while working on multiple projects in the field. With their arsenal of Sound Devices 788T digital recorders with CL-9 linear fader controllers and Sound Devices 552 field production mixers, Delgado and his team can handle anything their demanding slate of projects throw at them.

On FX Network’s "The Ultimate Fighter," Delgado employs seven Sound Devices 552-based field audio packages, each with four Lectrosonic 411a receivers and a Schoeps CMIT Shotgun mic along with a Zaxcom Stereoline camera link system. The sound department deploys eight production sound mixers, a multi-track engineer, and three audio assists who manage media, freshen batteries and troubleshoot any issues that may arise.

On "Design Star," Delgado used six 552s and two 788Ts with two CL-9s, mostly to capture dialogue. The show, shot primarily in the field, kicked off with a cast of twelve contestants, three judges and a host, with each episode seeing the elimination of one contestant. On this predominately field-based reality show, Delgado used two 788Ts with CL-9s on a cart. Whether the contestants were in the field completing challenges or in the studio, the 788T was a mainstay in his rig.

"The Devil's Ride," which chronicles life inside one of Southern California’s motorcycle clubs, is another interesting project for Delgado, as it was recorded documentary style, with a skeleton crew. There were two camera teams, each with two cameras, and a sound mixer with a 788T, seven wireless receivers and a boom. Delgado and his team followed the bikers throughout their travels and captured everything along the way. The motorcycle effects were captured mostly through booms, with a lot of the recorded audio captured off lavalier mics.