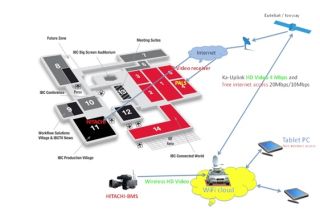 The system combines DriveNews PKM-120Ka, a Dual Ka-Sat (IPTV) SNG antenna system, which has been developed by PALS and Teradium, HD cameras from Hitachi and Eutelsat’s two-way IP/TV satellite service. The companies plan to stage a live HD SNG contribution feed that will access and deliver content created in and around the RAI’s exhibition halls.

Newly developed by PALS and Teradium, the portable antenna system can be mounted on standard vehicle roof rails. This lightweight auto-pointing antenna system is available in 77cm and 120cm aperture size versions. The antenna systems allow a one-button-push connection to EUTELSAT KA-Sat within minutes and a dedicated connection speed of up to 20Mb/s upload and 40Mb/s download to the Internet.

Live HD video captured in the IBC’s outdoor exhibition zone using Hitachi’s SK HD-1000 broadcast camera will be sent to the NEWSNG antenna vehicle via Hitachi and BMS’ COFDM wireless signal routing system. Inside the vehicle, the HD video material is encoded and sent back to base via a dedicated satellite uplink using Eutelsat’s bidirectional service.

Inside the main exhibition halls, on the Hitachi stand (11.E30) and the PALS stand (4.A51), the live video transmission will be screened via terrestrial Internet inbound. Attendees can also see the NEWSNG antenna vehicle in the outside broadcast zone, outside the exhibit halls, where a free Wi-Fi cloud will be available to connect handheld devices to the Internet.

Paddy Roache, Director and General Manager of Hitachi Kokusai Electric Europe, said that using the combined products, an SNG team could get on location and start broadcasting HD images “within the shortest time period imaginable. It’s not just a question of short set-up time, but also of the superb image quality that this system provides.”

Of note: Hitachi has been a long-term collaborator with Japanese broadcaster, NHK on the Super Hi-Vision (Ultra HDTV) project. Last month, NHK debuted a new lightweight prototype Hitachi SHV camera at special screenings of the 2012 London Olympic Games. The new cameras weigh just 8lbs (4kg), compared to 44lbs (20kg) for the models being used to record Olympic events, and 175lbs (80kg) for the original SHV camera, made in 2001.