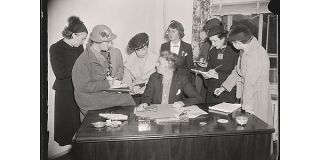 SMILING, STILL: I used to think a job in journalism would be downright amazing back when I was wearing steel-toed Redwings and swinging balled-and-burlapped shrubbery off the tailgate of an International.A few years later, when I was strutting around Manhattan in a discount LeSuit and making essentially the same wages I had in the Redwings, I had to wonder what memo I’d missed.

The business I’ve come to know as “news” has little or no resemblance to the one I learned about working my way through the University of Nebraska on the business end of a shovel. No one knew then that the Internet would demolish established media business models. No one anticipated how reviled those established models would become. It was unimaginable in the mid-’90s that someone would resell TV station signals without authorization.

Now, folks like Barry Diller, Alki David, Todd Weaver and others insist they have some sort of right to do so. Why? Because they can, apparently. Or so they think. Todd Weaver’s ivi.tv, which started rebroadcasting TV signals in 2010, is now but a weblog with occasional updates on the court case that shut it down. Weaver positioned himself as Robin Hood—better to be right than rich, he told Fierce’s Jim O’Neill last year. Messrs. Diller and David have no such plutocratic quandaries. They’re just moving pawns for reasons not yet fully revealed—or just for fun.

They’re not alone, by any measure. They’re just massively more wealthy than your average content pirate, except for maybe Kim Dotcom, who got rich by being a pirate. The main goal for all of them is to make money off of someone else’s work without paying for it. That’s all quite lovely unless one is on the working end of that equation, where most people reporting the news reside. Homelessness and hunger are not generally conducive to the type of attention, vigilance, focus and study that news requires.

I understand that attention, vigilance, focus and study are not always in powerful evidence when it comes to the news. Everybody gets a five-legged kitten story, or some sort of tip that leads to a sloppy mash-up of uncertainties after sources bail and there’s a black news hole to fill. Then there’s the escalation of plagiarism, which needs to be addressed at the industry level, especially if reporters are under too much pressure to do to much. A proliferation of media platforms hasn’t translated into a proliferation of news personnel. As one editor quoted in “Overheard in the Newsroom” said, “The responsibility to do all those things is still here. It’s just that all the people are gone.”

That’s not to make excuses for plagiarism or sloppy reporting, but it happens, and it furthers the notion that just anyone can be a journalist, and therefore does not need to be paid. A growing percentage of “reporter” positions on any given job site are advertised as “pro bono.” So people can get their byline on the web, I was told by one enterprising entrepreneur who planned to start a “news” website by aggregating from established sources and enlisting free contributors. How getting one’s byline on the web even matters is baffling, since any type of life form can do it. (And quite frankly, one has a better chance of rising to a modicum of popularity if one is other than human.)

Even so, with all the warts and misfires in the news business, a level of traditionalism remains relevant. If it didn’t, local TV signals wouldn’t hold the same attraction for pirates. Self-stylized entrepreneurs wouldn’t be aggregating from established news sources. People wouldn’t be stealing the work of news professionals, and TV stations across the country wouldn’t be adding newscasts across their schedules.

There appears to be an unprecedented appetite for news, probably because of the very platform explosion that’s cannibalizing the business. It seems the smart money would invest in news, and by that, I mean people. No amount of software, hardware and overly optimistic delegation can make up for what the business now needs more than anything else.