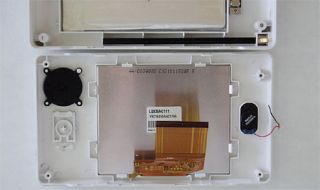 Last month I decided to risk voiding the warranties and possibly turning my newest ATSC Mobile DTV gadgets into paperweights by opening them up and looking inside.

You don't have to take the risk—I've posted photos of the insides, including the chip numbers, here and on the Web.

I described the RCA DMT-336R in an article in the April 21 edition of my weekly RF Report e-mail newsletter (incorrectly referred to as the DMT-335 in that article—my error). In that review I was quite impressed with the performance of this little receiver, both on UHF and VHF. Once I got inside, I understood why it worked so well.

Fortunately the DMT-336R came apart easily. The only tricky parts were the flexible ribbon connecting the LCD with the main board and some very delicate wires to the speaker mounted on the LCD housing. The connection to the LCD came apart with no issues. One of the speaker wires, however, didn't (Fig. 1).

Fig. 1: RCA DM T-336R LCD front panel You will notice there are wide bands of gold-plated contacts on both sides of the PC board, (see Fig. 2). These mate with the silver-coated plastic shields, shown in Fig. 3. This superior shield is one of the reasons the DMT-336R performs as well as it does. The large shields serve as a ground plane for the single-element whip antenna, improving antenna performance.

I couldn't find any information on what appears to be the ATSC demodulator chip, an LG2500R. The ATSC MH demodulator is the LG2161; it says "ATSC MH" on the chip. The tuner is the MaxLinear MxL5007, a popular choice in newer DTV receivers. The Li-ion battery in the unit shows a rating of 4000 mAh, 14.4 Wh, at 3.6 volts.

One of the major complaints I've heard about the unit is the use of a 4:3 display when all ATSC MH and most ATSC broadcasts are 16:9. It looks like DigitalStream could have squeezed in a 16:9 display by moving the speaker to the same side of the case as the rocker switch and menu button.

Fig. 2: RCA DM T-336R PC board Overall, I was impressed with the solid construction and good shielding in the little RCA receiver!

I also tore apart a Hauppauge Aero-M USB tuner. This was ordered from the Hauppauge Web store after the NAB Show and appears to have some updates from the prototype unit I got last year.

The unit excels in performance and as I noted last month it could become my primary ATSC USB tuner if it worked under Linux. The Aero-M uses the LG2161 ATSC MH demodulator. For conventional ATSC reception it uses an LGDT3305, clearly labeled as "7th Generation VSB/QAM Receiver." (See Fig. 4)

A MaxLinear MXL111SF serves as RF tuner, based on the MXL5007, and USB controller, all in one. It is not supported under Linux and after contacting Devin Heitmueller at KernelLabs I didn't get a clear idea when or if it would be supported. He wasn't working on it.

Fig. 3: RCA DM T-336R plastic shields Devin, as you may recall, was responsible for getting my still-favorite USB ATSC tuner working under Linux—the PCTV HD Pro Stick model 801e with the Samsung demodulator. Let's hope one of the other developers working with the MaxLinear devices can come up with a Linux driver for the MXL111SF.

Devin was kind enough to refer me to an article on his website noting that the newest Hauppauge HVR-850 USB tuners include the LGDT3305. I haven't been able to find one yet—a unit ordered in July arrived with a February 2011 date code and still had the Auvitek demodulator, same as in the HVR-950Q. It performs well, just not quite as well as the PCTV Model 801e or Aero-M.

Testing these units in Los Angeles I noticed more errors on KOCE (DTV 48) than I had before. KLCS on channel 41 seemed a bit worse, but that station is one of the lowest-powered, full-service stations in the market so I couldn't be sure. KCET (DTV 28), while a medium-power station, came in with no errors. I noticed the errors occurred when I was accessing Web pages or e-mail on the Internet.

To get a better idea of what was going on, I used the Linux "femon" program, which continuously displays signal level, SNR and error rate during reception. I determined that my Samsung 4G LTE hotspot was interfering with reception, even when it was located several feet away, off the back of my Terk-amplified log periodic indoor antenna.

Fig. 4: Top view of the Hauppauge Aero-M PC board While SNR varied, as expected with indoor reception, the errors did not show up except when the 4G hotspot was transmitting. Signal level and SNR dropped with the antenna preamplifier off, but I still saw errors correlated to data going over the 4G hotspot.

If there is any good news, it appears that tuner design determines the extent of the interference. My favorite PCTV Model 801e receiver didn't do too well. The HVR-950Q seemed a bit better and the Aero-M was clearly superior to either of the older tuners.

Older receivers had to cover channels 2–69. The new Aero-M doesn't need to worry about channels above 51. You can see what looks like a matching network or filter between whip antenna and the antenna jack in one of the Aero-M PC board photos.

Fig. 5: Bottom view of the Hauppauge Aero-M PC board For Mobile DTV receivers to co-exist with 700 MHz LTE transceivers in mobile devices they will either need excellent filtering or, easiest, a mechanism to shut off the 4G circuitry when receiving Mobile DTV. Note that only the upper UHF channels appear to be affected, but if the FCC succeeds in moving wireless lower in the UHF band, other stations will be affected.

I plan to grab some spectrum analyzer plots showing the 4G LTE signal strength compared to that of the upper UHF DTV stations as measured at the output of the TV antenna. They should be interesting!

CORRECTION: In my column last month on SPX/Dielectric testing of CP versus linear polarization in Florida, I said the digital format was DSTAR. I should have looked at the photos more closely. Thanks to Ed Allen for pointing out the testing used Icom IDAS running on commercial Icom NXDN products.

Comments are welcome! Email me at dlung@transmitter.com.