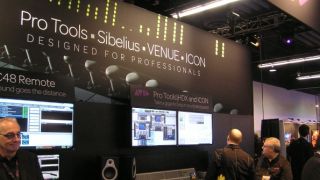 It was NAMM, with all of the color and cacophony you would expect from the premier music trade show of the year – more than 1,600 exhibitors throughout the Anaheim Convention Center’s five halls showing everything from the latest guitar pick to bleeding-edge networkable / virtual digital audio devices. Filtering through this bounty, a handful of items arose that should prove significant for broadcast production.

Professional digital wireless mics have recently come of age, and Sony‘s DWX series has the needs of broadcasters fully in mind. Included in the lineup is the DWR-S01D two-channel camera-mount receiver that brings the functionality of the rack-mount unit to the camera operator. The receiver, with a multi-pin connector on the end, slots into certain Sony cameras to provide integrated video and audio capture, or into a compact adapter that provides AES/EBU and analog XLR outputs, plus headphone monitoring and time-code input. Durably built metal handheld, bodypack, and plug-on transmitters are available; the bodypack is quite compact and comfortable for the talent.

Transmitting in the UHF band, the system provides 24-bit/48kHz audio with wide dynamic and frequency response, and an end-to-end system latency of 3.6 ms. Using the DWX wireless, it is possible for the audio signal to remain in the digital realm from the mic capsule all the way through the camera, post production, and transmission – until it is reconverted to analog at the user’s television.

Digital transmission allows more channels of wireless to be placed into the existing RF spectrum, with great immunity to interference, and a clean full-bandwidth signal that does not degrade with distance. Transmitter outputs can be set at 1, 10, and 50 mW ERP, with lower RF levels perfect for studio environments and the higher level for capturing remote events. The signal can be encrypted as desired from an Rx/Tx pair to a full multi-wireless production on a single password.

The system features a 2.4 GHz wireless link for metadata that allows control of transmitter functions from the receiver or certain cameras – including level attenuation, high-pass / EQ filtering, frequency and RF level settings, channel naming, and even placing the Tx into a low-power “sleep” mode without disturbing the talent. For the studio, two-channel, 1RU receivers can be interconnected via IP-based networking, and controlled via the software application.

Tascam’s show persona was substance rather than hype, and stood out with the HS Series of professional digital recorders (including their HS-P82 8-track field recorder and related audio tools on a production cart). Nearby was the HS-4000, which provides four channels of up to 96kHz/24-bit recording with time code capabilities in 2RU, and both analog XLR and AES/EBU outputs. Well-positioned backlit function buttons and a substantial color touchscreen display allow quick access to its functions.

Two slots for CF cards permit simultaneous recording, yielding an identical backup copy. The unit can be placed into “dual deck” mode to function as two separate flash-start playback devices, with the RC-HS32PD remote panel offering two banks of 16 electronically labeled buttons to instantly access recorded tracks and play sound effects or other cues. The HS-2000 has similar features in a 2-track format. All of these recorders can be networked and controlled remotely.

Also shown was the DR-680 multi-channel portable recorder for location recording, which offers 6 mic inputs with low-cut filters and phantom power with accessible mixer controls, and records up to eight tracks of broadcast WAV format at 96kHz/24-bit resolution.

Avid continues its integration of digital audio software with production hardware by expanding the communication between Pro Tools, interfaces, and mixing consoles. The Venue SC48 console has a Firewire Pro Tools interface built in, and is available as a single unit or with the control surface separated from its I/O – which can be placed remotely up to 100 meters away to minimize analog cable runs. The console has 16 input faders, and takes a maximum of 48 mic/line inputs.

The ICON consoles, designed for post production, also integrate closely with Pro Tools sessions and plug-ins, as a complete recording and mixing interface. The user can access multiple Pro Tools systems and work with audio and automation simultaneously. ICON also ties in tightly with Avid’s video editing hardware – though with the NAMM Show’s audio focus, this was not shown.

Booth staff also turned me on to the AVnu Alliance (www.avnu.org) – a coalition of audio, video, and computer companies who are developing standards and equipment certification for pro-quality audio and video streaming through networks (AVB).