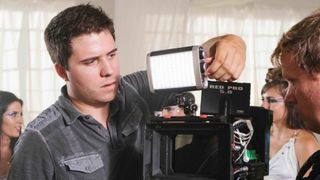 Nashville-based Director/DP Jon Chema battled the usual challenges for a recent music video, “Fairytale,” for independent Kansas City pop artist Helene Michele — tight budget, short two-day shoot and ambitious set-ups. To make the schedule over multiple major set-ups, the crew had to roll, light and move quickly. Several locations had limited power, and extensive electrical runs with generators were out of the question. Chema needed plenty of light because he used the RED Epic and was shooting a lot of high speed.

Litepanels Sola 6 LED Fresnels were the perfect solution. While the quality of soft light and color rendition was excellent, the most significant aspect was that they were daylight balanced. Tungsten lights require CTB gels to cool the color temperature, which means you lose a ton of light. HMIs get really hot and require setting up ballast, header and cables.

A handheld Litepanels Sola 6 slightly out of frame added another all-important flare to one of Chema’s shots. When in need of an eye light, Chema called on the Litepanels Croma, rigged to the mattebox on the Steadicam. Even though the power comes from six small AA batteries, it is punchy enough to be diffused and still read on camera.

“Fairytale” is a narrative music video showcasing Helene Michel. It will be featured on her website as well as that of Quxotic Fusion, a Cirque du Soleil-style dance and acrobatics group featured throughout the video.