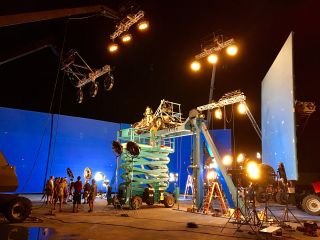 TV studios are typically showcases for the latest technology. While broadcast standards haven’t seen the type of liberalization found in digital cinema (where there are almost as many resolutions and aspect ratios as there are cameras), studio cameras are now smaller, smarter and more flexible. They’re often fully automated with robotics as well. Many studios aren’t yet ready for 4K yet, but that will come, as will 8K and beyond.

Style has changed too. Digital studio switchers are now capable of astonishingly sophisticated multi-layered productions, with so many elements on the screen that it would be impossible to run a live show without automated and data-driven graphics. Meanwhile virtual studio sets have made smaller studio spaces viable with even more impressive results.

Among all this progress—which basically means you can produce more, better, and for less— you might think that lighting hasn't changed much. When you look upwards in a broadcast studio, there’s still the same sea of light sources, but with, perhaps, a little less heat.

But there is a revolution in lighting, nevertheless. What’s different is that when LED lights first appeared, they had a mountain to climb: they weren’t very bright, and the color spectrum was objectively bad.

Apart from these pretty fundamental issues, LEDs had some pretty big advantages right from the start, and we’ll look at these in a minute. But first, some basic questions you need to ask when considering LED lighting for studios.

HOW DO YOU CHOOSE AN LED LIGHT TO GIVE YOU THE BEST AND MOST USABLE LIGHT OUTPUT?

The volume of light and the quality of light are extremely important in broadcasting and studio environments. Broadcast camera sensors are generally smaller than in cinema production, so on average, they’re less sensitive to light. In a broadcast environment, lenses usually shoot with a deeper depth of field, as overall focus takes priority. Color quality and rendition are important, because color grading is not part of the pipeline to the viewer’s screen.

In a sense, what’s important is that the quality and volume of light allow producers to “get it right the first time”. There’s no possibility of “fixing it in post”.

WHAT FEATURES HAVE THE MOST IMPACT IN A STUDIO SETTING?

In a studio, where lights are typically in a grid control, versatility is everything. Lights have so many features and variable elements that being able to manage them with DMX is crucial. As we move forward and technology becomes more able, wireless control is becoming a requirement.

LumenRadio is one example but there are other wireless systems on the way that will bring new features and new capabilities. Suffice, to say, though, in a working studio environment, lighting management and control are vitally important.

LEDs are now breaking through the glass ceiling and as they approach the light performance of “traditional” fixtures, they’re becoming an obvious choice, because there are now very few downsides.

It’s not just the light output, but the sheer variety of LED devices. This makes lighting options far more “granular”. What this means is that there you can use more, smaller lights to achieve a particular look or type of illumination. If you want something bigger, then there are now very powerful, punchy LED lights readily available—and controllable.

And one final point: LEDs are long-lasting light sources. There’s no need any more to budget for expendable components like bulbs and tubes that are expensive and take time and effort to maintain.