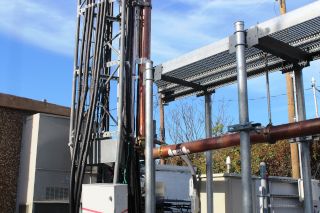 ATSC 3.0 offers at least three ways to make reception easier that aren’t available or are difficult to implement in 1.0. One involves providing a stronger signal to the viewer. The others make the signal more robust so less signal strength is required.

A DTS consists of multiple transmitters on the same frequency spread throughout the coverage area to provide a uniform strong signal for indoor reception throughout the coverage area. DTS was available for ATSC 1.0, but it was difficult to provide a uniform signal without creating areas of self-interference. ATSC 3’s COFDM modulation can eliminate that interference.

A major advantage of a DTS is that, by providing a stronger signal level, less of the broadcast channel’s capacity has to be devoted to error correction and higher order (less robust) modulation constellations can be used, which provide greater efficiency (bits per Hertz). A DTS is the ideal way to improve ATSC 3.0 reception as not only is the stronger signal easier to receive over a wider area, but the higher data rates allow for more program streams and higher resolution video.

The problem is that building out a DTS involves setting up multiple transmitter sites, getting a signal to those sites and in addition to capital cost, extra operating costs (leases, power, etc.) for multiple transmitter sites. For a DTS to provide reliable indoor coverage to an entire market, some FCC rules changes are also needed. These are outlined in the recent FCC NPRM FCC 20-43.

Unlike ATSC 1.0, ATSC 3.0 allows a trade-off between robustness and data rate. It is possible to transmit a signal that can be received at or below the noise level (0 dB SNR) but this requires a robust modulation method (least efficient) and a large amount of error correction coding, leading to a very low data rate.

There is almost infinite flexibility in determining the trade-off, so a broadcaster could decide to sacrifice some bits using Time Division Multiplexing (TDM), for example, from the less robust but higher bit rate streams to create a more robust physical layer pipe (PLP) on the signal. Because data rate would be limited, the robust stream would likely be limited to standard definition (SD) or perhaps 720p HD, depending on how capacity was allocated between the main and robust PLPs.

The reduction in power means the enhanced layer has less signal at the receiver, but because the less robust signal does not give up time or frequency to the robust layer, more capacity is available to offset the reduction in power. As with the TDM example, the trade-off between robustness and capacity remains. I describe some early tests of LDM in my 2015 article “LDM—Stacking Signals for Improved Performance.”

All three of these methods can be combined, providing even more flexibility.