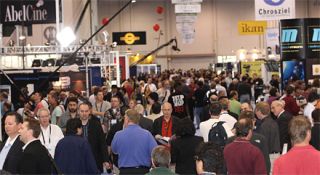 LAS VEGAS: Where Hollywood meets Silicon Valley meets Madison Avenue" is how NAB describes its Content Market, one of several new come-ons at the NAB Show next month. In fact, the overall theme of this year's annual industry reunion is "The Great Content Shift: Defining Your Evolution"—which promises to bring a number of new (and newly named) attractions, more than 150 new exhibitors, and other additions to the Las Vegas Convention Center, April 14-19.

Sponsored by Hollywood icon Warner Brothers, the new Content Market (South Hall) is designed to provide an environment for content owners to meet up with reps from digital distribution channels and properties. The site will allow domestic and international buyers and content managers to discuss the growing options offered by today's emerging multi-platform possibilities. Two popular sub-sites—the Content Theater and Content Lounge— return this year within the larger Content Market footprint.

"We feel there's been a missed opportunity at our show to really put all the content players together in a way that the content pipeline can be filled," said Chris Brown, executive vice president of NAB Conventions & Business Operations. "Today you've got this very fragmented multiplatform type of environment. We know we're already pulling in the leading network content providers to the show, and there's never really been that kind of dialog here, so the Content Market will remedy that."

Brown believes NAB's own emerging-technology background demonstrated over the decades (i.e., the association was a key player in the advent of digital HDTV) has served as a guidepost toward everything that's been happening lately in digital media. "And now adding that third element this year—Madison Avenue—to connect in the Content Market is important, as well," he said.

Also new is the "StartUp Loft" (South Hall Upper Lobby), an attendee destination featuring a select group of new companies in the media, technology and entertainment realms. Staying true to its title, the StartUp Loft will only include companies that launched their commercially available products or services no earlier than Jan. 1, 2011. "The Loft is a way to keep the focus of the show on 'what's next,'" said Brown.

One Loft participant, Orlando, Fla.-based SocialNewsDesk, is a social media management platform built by, and for, journalists. Kim Wilson, its founder, worked in television newsrooms for several years and decided to create SocialNewsDesk "because it was a tool I needed as a newsroom manager. But it didn't exist… so I made it!"

Wilson said her recent start-up works because it understands how newsrooms function in the real world. "Our dashboard puts everyone on the same page and creates accountability in the newsroom," she said. "One thing we're really excited to show at NAB is our 'Choose Your Candidate' Facebook app for newsrooms. It's fully customizable so newsrooms can use it to showcase their local, state and national races and a way to make political coverage an interactive experience for the viewer."

Inetsat, another Start-Up Loft exhibitor out of Montevideo, Uruguay, aims to provide an alternative to typical video distribution methods. Inetsat CEO Pablo Salomon said with the exception of sports and news channels, most pay-TV channels have very little live content and much of what is typically offered is not new. "For these channels, the traditional distribution architecture where the channel originates from a central location and broadcasts in real time through a satellite transponder to cable operators is no longer the best alternative."

Salomon said with Inetsat, channels originate directly from video servers located at each cable operator—replacing the commonly used satellite receiver-decoder. "Therefore, it's only necessary to distribute the new content to these video servers over the Internet days or weeks prior to air date," he said. "For cable operators, this new architecture is transparent and has no operating impact since the video server where the linear channel is originating replaces the traditional receiver-decoder."

Kamal Varma, vice president of Product Management & Marketing at EnaCor in Beaverton, Ore., said his new firm will showcase its "In-Video Search" technology at the Loft. "Demos will include how [content distributors] can make their online videos come alive via automatically placed contextual information and interactive hotspots," he said. "By finding and tracking objects such as brand logos and product images in videos, we can help content creators and owners automatically extract, and better utilize, the rich information embedded in their videos for contextual advertising and video commerce."

While the popular Cloud Computing Conference (formerly Content in the Cloud Conference) continues this year with its all-day agenda on Monday, April 16, a new pavilion in the middle of the North Hall (N3222N) will be dedicated to cloud storage technology. Sponsored by San Antonio, Texas-based IT hosting company Rackspace Hosting, other pavilion exhibitors (at press time) were to include CloudSigma, Strategic Blue, Reelway GmbH, and Production Minds, among others.

"Broadcasting is full of some of the most expensive data in the world—namely high definition video," said Megan Wohlford, storage product manager at Rackspace Hosting. Storing those videos in the cloud allows broadcasters to continue providing viewers with the experience they've come to expect without the challenge of storing, backing up, and distributing all that data. "In broadcasting today, we're seeing companies rely more and more on user-generated content. That means while local stations get the benefit of more content and, thus, more stories and coverage, they're also having to battle with unpredictable data amounts.

"For example, users may generate a steady flow of data on a normal week, but let's say a tornado hits a local county, and thousands of users caught it on video and want to send it in. How quickly can IT departments get more storage servers on-site and provisioned to handle that rush of data? It can take weeks to set up new servers. The cloud allows companies to expand their storage automatically and broadcasters will never have to limit them," Wohlford said.