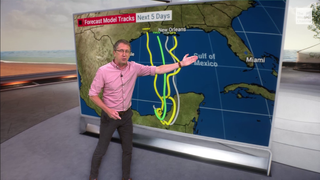 LAS VEGAS—The Weather Channel has cut the ribbon on its new Reality Virtual Studio, which is brought to life by the help of advanced immersive virtual studio production tools from Zero Density.

A native Unreal Engine, node-based compositor, the Reality Engine offers photorealistic 3D virtual studio and augmented reality graphics. This will be used for The Weather Channel’s Immersive Mixed Reality Experiences, according to Michael Potts, vice president of design at The Weather Channel.

The studio officially debuted on June 2.

The Weather Channel has been using immersive, virtual reality technology for the last few years, having previously shown the potential impacts of tornadoes to its studio with graphics by The Future Group.

Below is a video of how The Weather Channel is using Zero Density technology in its new studio.