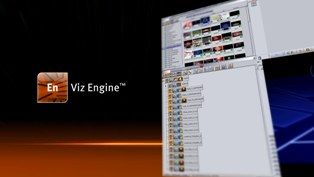 Integrations with Twitter, Facebook and Youtube will be shown with Viz Virtual Studio in Vizrt’s public show at the booth, with Viz Ticker3D for the design of creative tickers, Vizrt’s character generator Viz Trio, and with Viz Multichannel for channel branding. Also new at IBC will be a Vizrt Skype interface which provides tools for the newsroom and production staff to interface with Skype calls directly from newsroom systems, Viz Trio and Viz Content Pilot. The Vizrt public show will include second screen integrations that demonstrate how the audience at home can interact with a broadcast on their mobile device.

Vizrt will showcase new IP streaming capabilities for its Viz Engine real-time 3D compositing engine. Viz Engine now has the capabilities to take streaming content in and out, adding flexibility to the engine’s configuration in the station environment since only a network connection is needed. The Viz Engine renders real-time content and outputs the IP stream so the video can then be easily distributed to the web and mobile devices. Viz Engine is also being updated further with DVS SpycerBox integration. A new plugin for the Viz Engine gives users the ability to trigger clips in a EVS instant replay system.

Vizrt will show a new Viz Video Engine redesigned for HD. The recorder is controlled and managed by the Viz Media Engine. A single chassis handles four channels of ingest and playout, each capable of recording files from an extensive selection of HD and SD broadcast video formats. All video is wrapped in the MXF format, stored locally and made accessible through an FTP interface. Files are automatically moved and transcoded to centrally managed storage by Viz Media Engine.

The company will also highlight a partnership with DigitalGlobe to provide a low-cost streaming imagery service to Viz World, Vizrt’s platform for the creation of branded maps and geographic animations. Viz World is being further enhanced with the introduction of OpenStreetMap data.

Vizrt will also showcase innovations in sports analysis and 3D sports coverage as well as the full Vizrt suite of broadcast graphics tools.