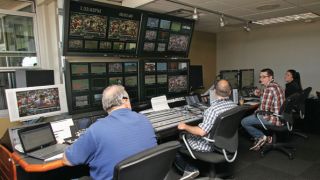 For the video production department at Major League Baseball’s San Francisco Giants — known as SFG Productions — the game is so much more than balls and strikes. It’s about supporting a brand across a multitude of distribution platforms (live and on-demand) and generating new revenue from outside sources. They also have to create a captivating experience for the fans in attendance at AT&T Park, the team’s home.

A new HD control room located near home plate is connected via fiber to an edit suite of seven edit bays, about 700ft away.

Paul Hodges, executive producer of SFG Productions, said over the years the video production department had been using a disparate collection of broadcast gear that required a lot of manual and time-consuming processes — and some duplication — to get things done. It was unwieldy, but it worked. Then, in 2007, the team installed a new HD video scoreboard in center field, and everyone began to envision the possibilities.

With the help of Cutting Edge, a systems integrator in San Francisco, Hodges and his team set about to design a new, file-based production workflow that would achieve all of their goals for new A/V technology applications and more, in the most cost-effective way. Yet, and Hodges emphasized this strongly, image quality was of paramount importance. So, they eschewed lower priced, off-the-shelf solutions that some other teams have implemented and continued to add new “broadcast-quality” pieces as time went on. Staying with one vendor (Avid) for most of their post-production needs made a huge difference. Unlike their previous systems, all of the products they would choose to implement represented a single, pre-configured solution whose individual pieces were guaranteed to “play as a team” and perform in concert with one another.

“We looked at what the local regional sports network and other broadcasters in the area were doing to see what technology they were using, and they were all using Avid systems,” Hodges said. “We knew we would be sharing our HD content with them, so it had to be more than acceptable to them. It had to match their content perfectly, in terms of image quality and production values. And our team management supported the effort to put quality ahead of price.”

Renovating existing facilities located inside the park, the team made the move to HD operations with a new video production control room (complete with a Sony MVS-8000 multiformat HD switcher) located near home plate and a new series of edit bays along the third-base line. The control room supports the park’s new video scoreboard, TV highlights and some of the live streaming feeds the team sends out during a game. This advanced control room is connected via fiber to an edit suite of seven edit bays, about 700ft away. There’s also one edit bay adjacent to the control room and two other workstations located in the park’s administration offices, about 1000ft away.

The team’s camera complement includes several Sony HDC-1400 HD cameras on tripods, Panasonic AG-AF100 and AG-HVX200 HD cameras roaming the park, and a Canon 7D DSLR for specialty documentary work. All of the footage captured with these cameras is natively recognized by and easily edited on an Avid Media Composer workstation.

Chris Gargano, senior director of marketing and entertainment for SFG Productions, said the team produces content throughout the year — not just during the season — so the equipment has to stand up to the rigors of daily production.

“We’re creating content for the scoreboard, radio and television commercials, TV shows, and Internet content — both on-demand and live streamed — and it’s all generating new revenue,” Garano said. “The use of video is critical to achieving our goals. Multiplatform sports marketing and the use of video are important to most teams today.”

Indeed, today the department — which employs 15 people full-time and uses another 20 freelancers for every game day — produces about 10 hours of original programming a year, in addition to supplementing the live coverage by the local Comcast SportNet Bay Area sports channel with short pieces from the game to provide color. It produces popular shows such as “Inside the Clubhouse,” as well as 30 live webcasts, game roll-ins, short documentaries and player interviews. All are edited on 13 workstations running Avid Media Composer (5.5.3) software.

The team also makes extensive use of an Avid Interplay system, with which it ingests, manages and repurposes content stored on a newly installed (in February) Avid ISIS 5000 system with 96TB of capacity.

“It’s a lot of storage space, but the team feels, and rightly so, we will fill it up in a very short time frame,” Hodges said, adding that the team is in the process of digitizing years’ worth of game tapes and will probably be at it “forever.”

Stereo audio elements, including live voiceovers and sound effects, are all created in-house.

Once the tapes have been ingested into the system, all assets can be accurately tracked through the Avid Interplay using metadata tags (input during the logging stage) associated with each piece of content. With the Interplay, the team captures files in MXF wrappers and uses its media tools, such as Access and Assist, to help streamline the editing process.

Working on the Media Composer, the staff can place any format on the timeline and begin editing immediately. That’s important because it often has to turn around pieces quickly (sometimes in as little as 10 minutes) for the scoreboard during games. With version 5.5.3, the staff can work with footage shot at different frame rates (24fps, 30fps and 60fps). Before, Hodges said, it was a real challenge to mix and match the different signal types.

As per Major League Baseball rules, when the staff produces content for mobile devices, it creates an MPEG-4 file and sends it via FTP to MLB’s headquarters in New York City for public distribution to the variety of mobile video platforms.

Once they have been ingested into the system, all assets can be accurately tracked through the Avid Interplay using metadata tags (input during the logging stage) associated with each piece of content.

For SFG Productions, the eventual goal is to make many of the production processes automatic, so that, for example, content can be created on the Media Composer, Chyron HyperX graphics added via a template and then sent directly to an EVS sever for playout on the scoreboard.

The department is now also looking at LTO-5 data tape for long-term archiving and the new Avid Interplay Sphere, a real-time “universal access” technology that will allow it to edit and finish packages remotely from Spring Training (in Scottsdale, AZ), using assets stored in San Francisco.

“It’s important that we keep up with the technology and use the latest tools to our advantage,” Hodges said. “When we made this initial investment in the scoreboard and edit rooms in 2007, it was to support a new HD scoreboard. At that time, we were using different vendors for different things. It was a hodgepodge of technology that required a lot of manual labor. With our new equipment and system design, we feel we are better able to handle whatever the team throws our way.”

With today’s baseball fans exposed to all types of video content in their living rooms and elsewhere, it’s incumbent upon the team to keep fans thinking about the San Francisco Giants, no matter where they are. That’s where SFG Productions comes in. With a high on-base percentage (it covers all the bases) and an eagerness to embrace the latest video technology for the good of the fans, it could be the team’s most valuable player.