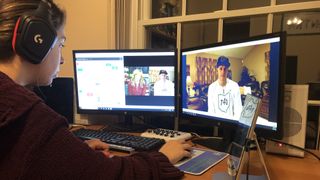 PALISADES, N.Y.—The Video Call Center had a hand to play in the first bit of live sports action (albeit a draft) since March, as it aided NFL Media with arranging live remote interviews with prospects for the 2020 NFL Draft.

Two weeks prior to the 2020 NFL Draft, which went with virtual for the first time, NFL Media Production Executives enlisted VCC to create a production workflow for the broadcast based on VCC’s video call production system. This included providing the technology platform to the homes of 58 prospective players, as well as coordination with video call producers.

The technology kits were smartphone-based. VCC then worked with families to create two locations in their homes that would appear on air, as well as how to overcome bandwidth limitations, framing and lighting the shots, and removing branded material. VCC said that it worked with prospects to create the optimal setup until right before they went on-air.

VCC rehearsed productions with the broadcast teams at ESPN, ABC and the NFL Network.

“The NFL Draft was easily among the most complex, virtual live events ever produced,” said Larry Thaler, VCC CEO. “It relied heavily on a new class of IP-based broadcast television technologies and services, including those pioneered by VCC, that were designed to support the evolving needs of broadcasters and other producers of the highest quality content.”