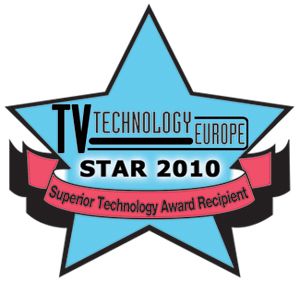 The Ki Pro Mini from AJA Video Systems won both a STAR Award and was also featured in our October webinar on ’25 Things You Might Have Missed at IBC,’ having been picked by two sets of review panels. That webinar can be found online.

The Ki Pro Mini is a tiny flash memory recorder that includes the full set of Apple’s ProRes422 codecs for no-compromise HD and SD full bit depth recording. It is small enough to attach to the top of a camcorder or on a DSLR rig, and the camera can be connected directly to the Ki Pro Mini by HD-SDI or HDMI. The recorded Compact Flash media can then be plugged straight into a Final Cut Pro editing workstation for immediate editing.

Products that incorporate Apple’s iPhone, iPod Touch or iPad have lately drawn a lot of attention as manufacturers harness the ease-of-use and power of the little devices, and several i-products were named STARs this year, including AutoScript’s iPlus professional prompting software App for iPad, iPhone, and iTouch devices.

Autoscript developed the App as an interface to its WinPlus News and Studio software. It allows downloading or transfer of scripts or run-orders directly to the iSeries device. iPlus is ideal to use as a standalone system for studio or field use, commercials, public speaking, video conferencing, and even podcasts. It can also be used as a news production tool by interfacing to an electronic newsroom using Autoscript’s WinPlus News prompting software as a bridge. Stories can be selected and downloaded, singly or in multiples, from a host laptop via a peer-to-peer WiFi connection.

Autoscript also offers a full range of professional hardware to mount an iPhone/iTouch/iPad for all applications on a camera or a stand.

Bluetooth is another consumer technology that seems to be common in pro applications today. Canon’s WB10R/T Bluetooth wireless control of portable lenses is an example. The system provides an alternative to the control cabling normally required between the lens controllers and the lens-camera systems. The system consists of a transmitter unit (WB10T) connected to the lens controllers, and a receiver unit (WB10R) connected to the lens drive unit. They can be separated by up to ten metres with the same degree of controllability as the cabling system they replace.

Chyron’s Quintette is based on Chyron’s Lyric PRO technology and graphics production workflow, and is a very full featured graphics workflow production and playout solution.

CLEAR-COM showed its HELIXNET unified, all-digital intercom platform that was developed from the ground up with five design concepts in mind: cabling simplicity, ease-of-use, networking flexibility, system intelligence, and audio clarity. HelixNet combines the configuration and network management capabilities of a matrix system with the flexible cabling and simplified user interface attributes of two-wire party-line systems.

Cobalt Digital’s 3 Gigabitcapable Fusion3G cards for openGear include a series of embedders/de-embedders and frame syncs. The openGear format handles cards from multiple manufacturers in the same frame. The Fusion3G series may be controlled and monitored using the ‘free of charge’ Dashboard software, as well as by Cobalt’s OGCP-9000 Remote Control Panels (SNMP monitoring is also supported). HD/SD-SDI versions of the Fusion range are also available.

The BrightEye Mitto Scan Converter was also part of a live backpack broadcast system demo at IBC (pictured) that deserves a mention. Vomodo is a mobile broadcast system using cell phone transmission technology housed in a backpack that can go anywhere. When an OB truck is too large or is cost prohibitive, Vomodo can be easily carried into breaking news environments.

Vomodo transmits by cellular network air cards to a server where the video can be accessed for broadcast. Web video streaming can be captured by the Ensemble Designs BrightEye Mitto Scan converter and converted to SD, HD, or 3 Gbps SDI for use in a broadcast news environment.

EVS’ Media Archive Director is designed to maximise your archive management process, to easily and rapidly access archives, and to instantly and simultaneously deliver content on multiple platforms with a central management interface. The concept of EVS’ Media Archive Director is to offer a set of software tools to manage all platforms of the workflows centrally, including their formats, and allow for intelligent media browsing based on metadata and logging.

Front Porch Digital’s DIVApublish is one of the most intriguing cloud-based services now available. Essentially, it’s a cloud-based service for automating framebased metadata creation and automated online video publishing, that lets users first map their content using a variety of tools such as face recognition, scene detection, speech recognition and the like; and then distribute said content to a wide range of devices and destinations.

At the Harris booth, customers saw a demonstration of the new Harris Magellan family of router control panels, which deliver a fast, powerful, and userfriendly way to control both Harris and thirdparty routing systems. Available as a series of 10 programmable hardware panel types in both 1 and 2RU versions, the Magellan template-driven panels provide intuitive, Web-based configuration for quick and straightforward setup in both local and remote operations.

IPV showcased its Teragator system that accelerates the workflow for live event production including news and sport. New capabilities making a debut at IBC include business analytic tools for the Teragator as improvements to its Curator system.

Teragator is a relational metadata aggregation and management application built on Semantic Web Technologies, a powerful tool that provides a platform to aggregate disparate metadata sources and data mining services to identify and manage complex relational links between assets and related data.

Currently data from regular sources, such as Nielson ratings and playout schedules, are readily available but often difficult and time consuming to analyse together. This becomes a simpler task with Teragator. More recently, perceptive customers are exploring dynamic data from sources such as Twitter to provide instant feedback on the success of its campaigns. Teragator simply aggregates live feeds into the mix and allows users to quickly see the effects of breaking stories.

The new AERO.file from Linear Acoustic won a STAR Award. Filebased customers are starting to realise that loudness scaling alone is not enough. When Linear Acoustic combined AERO.qc processing with RadiantGrid transwapping and TrueGrid transcoding technologies, they had a winner.

Ross Video’s Vision Octane Switcher with optional internal multiviewer is an eight MLE switcher with 35 full screen HD animation stores, 24 channels of 3D DVE with WARP capability, 96 inputs, 48 outputs, and an unprecedented total of 56 keyers – 32 full keyers, 12 auxkey mixer/ keyers on the aux bus outputs, and 12 DVE key combiners. Vision Octane can be loaded with any number of MLEs from one to eight, match any application, and be combined with up to nine different control panels. At IBC Vision adds an optional internal multiviewer. This multihead multi-viewer has access to all internal and external sources.

Centra is the latest example of Snell’s many years of experience and core of expertise in control and monitoring. In addition to complete integration of Snell products, Centra provides one of the industry’s most comprehensive third-party driver libraries and uses open protocols such as SNMP – bringing a new unified approach to controlling media technology.

Recognising that flexible control and monitoring is much more than device control and simple alarms, Snell developed Centra to serve as a powerful real-time solution that not only manages multi-vendor equipment failures, but also includes simple interfaces and wizards for the easy setup and configuration required of a typical broadcast operation.

Vinten’s new Vector 430 was developed in collaboration with leading global customers to bridge the gap between the Vision and Vector ranges. The Vector 430 is ideal for the growing number of applications that use both the compact box lens and large EFP barrel lenses.

Pandora is a compact and easy-to-read desktop or rack-mountable loudness monitor from Wohler that can be employed at any point in the broadcast chain to provide simple, accurate loudness monitoring. Pandora provides a clear, accurate reading of loudness measurements for any SDI video signal with audio.

Accepting and analysing SDI, AES, stereo, or multichannel audio, Pandora gives the user an accurate reading of loudness measurements (LKFS) over a user-defined period of time, ranging from five seconds to 60 minutes. And it’s yet another product based on an iPod Touch.

Wowza Media Server 2 is a high-performance video engine that unifies delivery of live and on-demand H.264 video or AAC/MP3 audio streams to multiple clients and devices, eliminating the need for specialised, clientspecific servers and encoders.