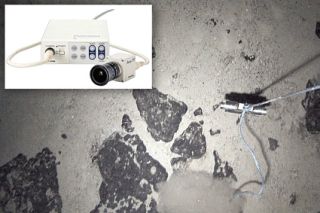 Toshiba HD-1
LONDON – Seesense, a U.K. and Slovakian-based distributor of Toshiba specialty cameras says it recently successfully tested a Toshiba IK-HD1 camera to a depth of 4,300 meters (14,000 feet), in preparation for a scientific research project next year.

The test took place in the Atlantic Ocean, off the Canary Islands, from a specially fitted research ship sailing from Lisbon, Portugal. It involved testing different types of lighting systems to work in conjunction with the Toshiba camera. All components were installed into a titanium housing fitted with a port consisting of a 25mm thick block of optically flat glass to cope with pressures of 421 bar (6114 psi). The complete assembly including the lighting system was lowered on a rig to depths of around 4,300 metres.

The HD images produced show a stainless steel weight suspended from the rig to gauge its distance from the ocean floor. The weight is seen bouncing along the ocean floor as waves move the research ship back on the surface.

The Toshiba camera, cable, lens, and recorder were supplied by Nigel Paine, MD of specialist small camera company SeeSense. An HD clip from the recording can be viewed on line from the SeeSense website www.seesense.org

“The footage produced demonstrates just how good the Toshiba IK-HD1 3-CCD camera sensitivity is despite its size,” said Paine. “Furthermore we were impressed at the excellent image quality even when captured from within the special housing designed to cope with these extreme depths. The clarity of the images is demonstrated by the test rig bottoming out on the ocean floor. Individual grains of sand a seen being stirred up from the ocean floor as well as a piece of coral being broken off by the stainless steel weight.”

This deep underwater achievement follows the acclaimed Toshiba Space Chair project (an advertisement promoting Toshiba's Regza television) which was produced and broadcast in 2009/2010. To create the ad, Toshiba IK-HR1S 1/3" 1-CMOS HD cameras were exclusively used to produce HD footage of an armchair suspended from a weather balloon. The ‘money shot’ was of the armchair with the curvature of the earth behind. In this test, the cameras attained an altitude of almost 30,000 metres (99,268 feet) and the project was claimed as the world's highest HD commercial.