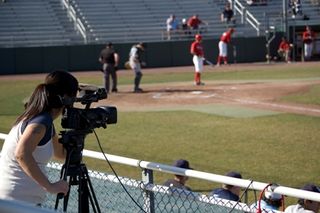 QUEENS, N.Y.– CBS Sports Network partnered with St. John’s Athletics recently to produce and deliver HD games for national television through the public internet for the first time ever.

Three games between the St. John’s Red Storm and Seton Hall at Jack Kaiser Stadium in Queens on the weekend of May 19th, were produced in full high-definition by the St. John’s Television Network (STJ-TV) and delivered to CBSSN for distribution on its national network, available to 99 million homes, without the use of television production or satellite trucks.

“We are excited about STJ-TV, our partnership with CBS Sports Network, and the possibilities this endeavor can provide St. John’s University in terms of exposure and potential revenue,” said St. John’s Director of Athletics Chris Monasch. “Our first successful national network telecast was the culmination of engaging technology, hard work by our staff and an outstanding partner in CBSSN. This weekend series is just the beginning, only scratching the surface of what we hope STJ-TV can become.”

The entire H.D. telecast was transmitted to CBSSN without using a satellite or fiber—but using an encoded signal over the public Internet—believed to be the first time ever for live action sports in H.D. on a national network. STJ-TV tapped VidyoCast as the weekend’s transmission carrier and employed Fujitsu as an IP transmission vendor.

The production was crewed by a 15-person team, a combination of local television professionals and St. John’s undergraduate and graduate students who are enrolled in a video production course at the University.

“We have a video production operation that benefits our entire University,” said Mark Fratto, St. John’s Senior Associate Athletics Director for Communications. “The St. John's Television Network gives undergraduate students a chance to learn and contribute to actual telecasts by experiencing hands-on H.D. sports production. We think this model will be tough to beat in terms of the quality versus the cost.”