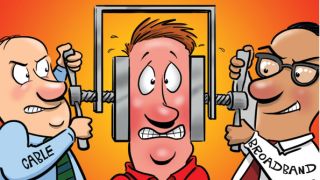 Way back in July 2010, I predicted a good future for Google TV. That anticipation of success for Google’s IP content delivery network appears to have been overly optimistic. Even so, this week’s list of press releases included one from Sony announcing a new version of Google TV, and one from Harman for a remote control that implements Google TV. In addition, you can hardly buy a DVD player that does not come equipped with a trial subscription to Netflix, VUDU, Hulu and a range of other IP-delivered content channels.

Apple remains hesitant to deliver on the oft-rumored Apple TV. That may be because its former leader, Steve Jobs, once said, “The television industry fundamentally has a subsidized business model that gives everyone a set-top box, and that pretty much undermines innovation in the sector.” Consumers continue to face challenges in getting free OTA content — with the emphasis on free. It is increasingly difficult (read that as expensive) to watch the local news.

As broadband and cable TV companies begin seeing some customers move to Internet-delivered content, they are taking steps to curb that appetite. Because most of today’s broadband contracts provide unlimited download (except for speed), consumers have little reason to control their IP cravings. It’s like the all-you-can-eat restaurant — salad to steak to dessert — with few restrictions.

While the jury remains out on whether consumers will switch to an OTT delivery model, the cable companies are taking steps to be sure that doesn’t happen. For instance, customers of Time Warner Cable in San Antonio are now encouraged to adopt a diet-restricted Internet consumption model. Customers who agree to a 5GB/month download limit get a $5 monthly discount. If, however, they go over that limit, they are charged an additional $1 per GB. Says Jon Gary Herrera, local TW spokesman, “We’re moving away from one-size-fits-all.”

For broadcasters, what’s hidden in this business model is that viewers could find themselves paying twice for what used to be free OTA content. Because the majority of consumers purchase both television and Internet service through the same vendor, the CDN has no incentive to cut viewers any deals. It’s the “You can pay me now or pay me later” scenario.

As much as this annoys me, few things in this world are not based on consumption. The grocery store doesn’t let customers have 10 heads of lettuce, but charge for only one. Nor can someone raid the grocery store meat counter for steaks and expect to pay for hamburger. Most of what we buy is based on how much we use — water, electricity, gas, etc. Yet, for some reason, many expect broadband IP to be provided on an all-you-want basis. Your local CDN is here to be sure that does not happen.

The solution to squeeze-play pricing is competition. Unfortunately, content delivery remains an uncompetitive business model. While I have the option of selecting from three cable companies and two satellite companies, there are no separate broadband providers. I am effectively forced to accept an all (TV plus Internet)-or-nothing approach from vendors. And, not surprisingly, prices between vendors are pretty much the same.

Getting local OTA broadcast content into American homes used to be easy and free. Now, it is neither. Broadcasters appear to again be stuck between the proverbial rock and hard place when it comes to delivering content to viewers.