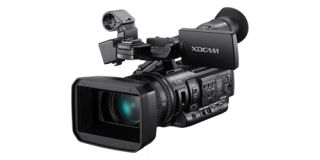 AMSTERDAM: Sony unveiled the latest additions to its XDCAM line at IBC in Amsterdam over the weekend, the PMW-150 camcorder and the PMW-50 field recorder.

The PMW-150 handheld camcorder has a 1/3-inch Exmor CMOS sensor and a 20x zoom lens with a focal length of 29.5-590mm and an optional wide-angle converter. Sony says the lens is equipped with three independent rings for focus, zoom and iris adjustment with full manual control, plus an image stabilizing function.

It can shoot in 1080/50i, 1080/25P, 720/50P, 720/25P or PAL, and features a four-position built-in ND filter switch, a “Slow & Quick” motion function that enables capture from one to 60 fps in 720p, and from one to 30 fps in 1080p. The PMW-150 also comes with a 15 second cache recording feature by which internal memory is used to capture content up to 15 seconds before the recording button is pressed. It can record to Sony SxS technology as well as SD, Memory Stick and XQD cards with an adapter. Wi-Fi remote control is available via an adapter.