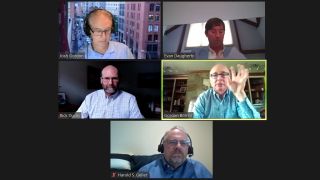 HUNT VALLEY, Md.—Besides proving themselves to be particularly popular during the COVID-19 pandemic, over-the-top video services like Netflix and Amazon Prime have provided a great service to the TV broadcast industry by acting as training wheels of sorts for ad buyers and agencies considering NextGen TV for their future ad spend.

That was one of the important takeaways from the latest in a series of ATSC 3.0 webinars organized by One Media 3.0 and Sinclair Broadcast Group. The online event, “AT$C 3.0 Webinar 3 NextGen Advertising,” on Aug. 4 brought together Gordon Borrell, CEO of Borrell Associates; Evan Daugherty, regional digital sales manager at Sinclair; Rick Ducey, managing director BIA Advisory Services; and Harold Geller, executive director, Ad-ID, for a 90-minute discussion of profiting from NextGen TV ad opportunities. The webinar was moderated by TV Industry strategist Josh Gordon.

“What I think really happened was OTT was able to train us,” said Daugherty. “It trained us on what to expect. It trained buyers on what they should expect from us, and it has given viewers a glimpse into what they can expect from ATSC 3.0.”

In essence, OTT normalized the concept of delivering video programming in a new way, bringing a level of comfort to ad buyers. “I think we might have seen a lot of heads explode on various sides of this equation if we would have launched ATSC 3.0 without an OTT kind of baby-stepping us through the process,” said Daugherty.

Speaking separately, Ducey and Borrell echoed one another in recommending TV broadcasters take seriously the opportunities NextGen TV offers, but each came at the proposition from the opposite direction.

NextGen TV offers clear paths to growing revenue across different business models, said Ducey. While BIA’s forecast predicts OTA and MVPD will retain most of the local ad dollars, online video advertising, including OTT, will eat into them.

Broadcasters should target dollars spent on online video and OTT with NextGen TV service, said Ducey.  He also recommended that as broadcasters develop their own over-the-top businesses, they might consider migrating ad dollars spent on OTT to a NextGen TV platform. “[T]hat’s where NextGen TV can target for growth going forward,” he said.

NextGen TV gives local broadcasters a way to compete more aggressively for the dollars spent on digital, as the total addressable market grows, he added.

However, Ducey advised broadcasters expecting to generate incremental ad revenue from NextGen TV mobile service not to overestimate its potential, but to look for those ad dollars somewhere other than existing mobile video budgets. Ad spending on mobile and tablet platforms will total just $1.4 billion in 2020 and grow to only $1.9 billion in four years—making it among the smallest of targets for reallocated ad dollars, he said.

Ducey also noted awareness of NextGen TV is growing among advertisers and ad agencies. Ad agencies are beginning to make inquiries about NextGen TV buys for 2021, however, they aren’t likely to take action until at least half of the TV households in the country are covered, he said.

If Ducey offered the carrot, Borrell showed broadcasters the stick of what is likely to happen if they do not embrace NextGen TV.

“Broadcast TV, I am sorry to tell you, is not in a great position,” said Borrell. “They are perfectly positioned to be heavily, heavily disrupted by all of this technology in the digital media, which is intensifying principally because of what is going on with COVID-19.”

Local television ad spending is a “big target” for competitors, mostly because TV is currently at the top of the list of media types where advertisers spend money, he said. However, during the COVID-19 crisis, Borrell’s research reveals that roughly 13% of TV ad buyers were keeping their ad spending at pre-pandemic levels and only 2% noted an increase. In other words, since the outbreak, 85% of TV ad buyers have reduced spending, he said.

However, the ATSC 3.0 standard gives broadcasters a leg up on their digital competitors that must be leveraged, said Geller.

“NextGen TV was designed from the ground up as secure and efficient,” he said. The standard was built with the capability to mitigate fraud.

“To give you an example, right inside the NextGen TV standard are standards for content recovery. It says very specifically, when it’s an ad it should… [have] a valid Ad-ID,” he said. “[L]et’s make sure it’s a valid ad rather than a fraudulent ad that somebody has placed. It talks about watermarks to be sure the content is the content that was broadcast.”

These attributes set NextGen TV apart from other media, he said. “The important piece is as we engineer NextGen TV, we have to be sure that … we follow these excellent standards for maintaining the highest quality of viewership,” said Geller.