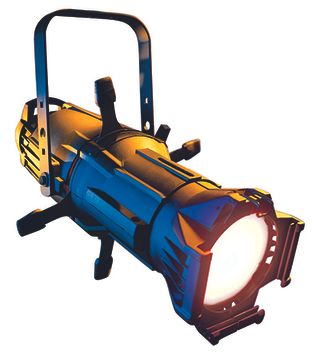 ETC Source Four fixture LOS ANGELES—I was introduced to the world of lighting in high school with legitimate (live) theater. There we had four primary types of lighting fixtures: the Fresnel, used on stage and over stage for general wash, backlight and some selected area lighting; the cyc light, used primarily for color wash on the rear cyclorama; large scoop lights, used primarily for work lights; and ellipsoidal reflector spotlight (ERS) fixtures, used for more focused and shaped light, generally from the front-ofhouse position.

EFFICIENT SPOTLIGHT
Many film and video shooters today know the fixture by a new brand name, Source Four, an invention of ETC (Electronic Theatre Controls), which manufactures a high-quality, versatile version of the ERS.

An ellipsoidal reflector spotlight features a built-in reflector in the shape of half an ellipse. By positioning the source light within the ellipse, rays of light emanating from the source are bounced off the surface and reflected to a single point, called the conjugate focal point (CFP). The light rays converge at the CFP and then diverge from there. The fixture’s double lenses located just after the CFP refract and focus the light to create a very efficient spotlight that can project light over great distances.

ERS lights feature an aperture, called the “gate,” located just before the CFP that cuts off unfocused beams of light and forms the shape of the light to be projected through the fixture’s lenses. The gate has four adjustable shutters, solid metal blades that can be inserted into the gate to further shape the beam of light. This is like building four flags into the fixture that allow the user to cut light off of unwanted areas and shape the beam into almost any simple linear shape.

Diagram of an ellipsoidal reflector spotlight Any interruption of light at the gate can be precisely focused in the fixture’s projected beam; taking advantage of this fact, ERS gates house a template slot into which gobos may be inserted. (Officially a “gobo” is any object that cuts or shapes light.) The fixture will project whatever pattern is cut into the template onto the surface being lit—for example, the pattern of a window frame, light through leaves of trees, stars, pretty much anything you can imagine. There are thousands of templates available from several different manufacturers. GAM Products, LEE Filters and Rosco Laboratories make their own templates in pretty much any shape you can imagine.

All ERS fixtures feature a series of lenses that focus and project the beam. These lenses, generally just a pair of plano-convex lenses, can be adjusted closer or further from the CFP to sharply focus or defocus the beam at different distances.

ERS fixtures come in various sizes, generally described by two numbers: the diameter of the lens (listed first) and the length of the barrel. The longer the barrel, the farther the lenses are from the CFP and the narrower the projected beam will be. The final number is the field of projection for the beam angle (center, hottest portion) of the light. The smaller that number, the more focused the beam is.

ERS fixtures are available from 250 Watts to 1,000 Watts, with the most common being the 750W ETC Source Four fixture.

CREATIVE LOOK
One of the most creative executions of an ERS on a film set that I ever witnessed was when I was a gaffer for cinematographer Robert Humphreys on a film called “The Invisibles,” starring Portia de Rossi. We were on the second floor of an apartment building shooting at night, but the scene called for daylight. We didn’t have the time or equipment to light through the windows from the outside, so Humphreys used an ERS to create a daylight look from the inside. The windows were covered with a sheer drape, so we focused an ERS on the drapes and cut the shape of the light to the shape of the window inside the drapes. The effect looked exactly like light was coming through the window instead of simply being projected on the curtain. By placing other instruments in the room to mimic what natural light would be like coming through the window, we sold the effect simply, quickly and quite effectively.

I used this effect several times later in my career. The first time I pulled it out of my bag of tricks I was a cinematographer on a film called “Mothman.” I was in Point Pleasant, W.V., and in a nearly identical situation—second floor and no access to lighting through the window—so we lit the window from the inside instead.

I have often used ERS fixtures to spotlight some object in the background, to shape light on the set or to introduce a pattern and breakup of light.

It’s important to note that the lenses in ERS fixtures are incredibly simple. The plano-convex lens is the most basic form of optics. No chromatic aberration correction has been worked into the lens system, which means that sharp patterns often demonstrate color fringing around the high-contrast areas. To fix this, we do the same thing we do with camera lenses: stop down the aperture. In this case we place a “donut” in the fixture’s front color-frame holder. A donut is merely a solid piece of metal with a small circle diaphragm cut into the center. The donut reduces the exit pupil of the lamp in the same way that an aperture in a lens reduces the entrance pupil. It helps to reduce the effects of chromatic aberration significantly.

The ERS is a versatile fixture that works great for lighting specific portions of sets or locations with patterns or specific cuts of light. They’re very controllable and efficient lights.