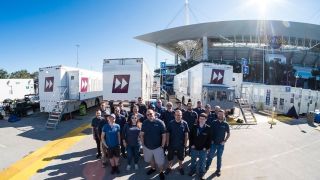 BURNSVILLE, Minn.—RTS Intercoms proved to be a key piece of the Game Creek Video production setup during Super Bowl LIV in Miami earlier in February. RTS gear was used to help provide key communications for broadcasters during the entire weekend of the big game.

Game Creek used RTS intercoms for its entire fleet of 10 OB trucks that were on site, each with its own integrated comms system. All trucks were connected using RTS Tribus and Trunking technologies. RTS ADAM frames were used in the primary production trucks, while Game Creek’s Edit 4, its newest support truck, utilized the RTS ODIN frame connected via Dante/OMNEO networking.

“We put an OMNEO card in each matrix frame, then Dante networked everything so they could share ports,” said Jason Taubman, senior vice president of technology with Game Creek Video. “We also use RTS trunking to bring them all together, creating a network of well over 200 user stations across the production compound.”

The user stations used a variety of RTS keypanels, including new KP-5032 and KP-4016 models and legacy models like the KP-32.

In addition to Game Creek Video’s own production, its cameras were used by a separate production supplier for the Super Bowl Halftime show. Communications in that situation were also supported by RTS technology.