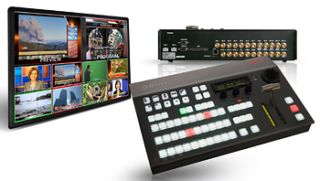 Priced at just under $10,000, CrossOver Solo is based on Ross’s CrossOver 12 platform. The 1 MLE Solo production switcher has the same features and specifications; however the main electronics and signal I/O are combined with the panel as a single unit, reducing cost and size.

“With the introduction of the CrossOver Solo, we are making available some very desirable features that were financially out of reach to many”, said Nigel Spratling, Switcher Business Development Manager at Ross Video“. “Houses of Worship, Educational Institutions and Corporate A/V systems have often had to make compromises to achieve their goals and stay within budget. With CrossOver Solo, that changes. We are very excited that we can now offer such remarkable power at a sub $10k price point with a product that is not a ‘stripped-down’ version of what producers really want”.

Just like its bigger brothers, the CrossOver Solo also has a direct interface to the Ross 2D/3D XPression CG and Graphics system. An XPression software package can be added that renders graphics, lower thirds and titles directly into the CrossOver media stores via a simple Ethernet connection.