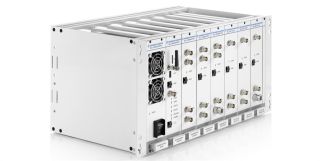 MUNICH, GERMANY-- The modular R&S MLx is a low-power transmitter from Rohde & Schwarz, designed to help optimize the coverage of DVB-T/DVB-T2 networks. The MLx also accommodates closed, small infrastructures such as those in remote areas or public buildings.

Designed for the lowest power classes (i.e. up to 10 W), the MLx UHF low-power transmitter integrates up to six transmit channels in one system. The 250 mm deep transmitter has flexible configuration options for various applications and receiving conditions. All interfaces can be accessed on the front panel. The transport stream can be fed via coaxial cable or satellite. The MLx supports UMTS for monitoring broadcast operations. It produces very little dissipated heat and is equipped with convection cooling, R&S said.

The MLx supports echo cancellation with levels that are up to 24 dB higher than the input signal. It provides a diverse range of optimization options with three echo windows and seven echo detection speeds.The 5 HU cabinet accommodates any combination of transmitters, gap fillers and retransmitters with power classes of one, five or 10 W and allows them to be operated simultaneously.

The redundancy concept is both fail-safe and customizable, from five-plus-one redundancy all the way to three individual modules in passive standby. Mixed DVB-T/H and DVB-T2 N+1 systems are also supported.

The Web-based interface gives a quick overview of the status of the integrated modules, the built-in N+1 switches and the GPS and satellite receivers.The R&S MLx is now available from Rohde & Schwarz.