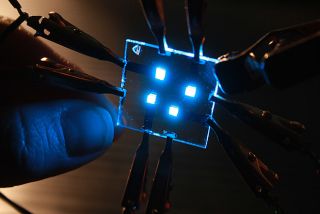 ANN ARBOR, MICH.: University of Michigan engineering researchers have designed what is said to be “an exceptionally efficient fluorescent blue OLED.” Professor John Kieffer and Changgua Zhen, a graduate student--in the Department of Materials Science and Engineering used redesigned materials that appear to double the known efficiency of fluorescent organic light-emitting diodes.

“Our results clearly indicate that fluorescent material have a bright future for highly efficient and stable OLEDs for flat-panel display and lighting applications,” Kieffer said in a release issued by the University. The ceiling for fluorescent OLED efficiency was thought to be 5 percent. Using redesigned materials and computer simulation, the researchers and their Singapore colleagues squeezed out 10 percent.

“With the material, they had some positive results,” Kieffer said. “We took those molecules and started to reconfigure them in a computer model, adding different functional groups in a systematic way. We identified the mechanisms that control the performance of OLEDs, and by applying the fundamental understanding so obtained we improved the materials characteristics. Our research demonstrated the importance of simulation-based predictive design.”

OLED technology is now coming into use in video display screens, but not so much for general illumination. Fluorescent OLEDs are also less efficient than phosphorescent OLEDs, according to the University’s release on Kieffer and Zhen’s research. Their findings were published in the journal, “Advanced Functional Materials.”
-- Deborah D. McAdams