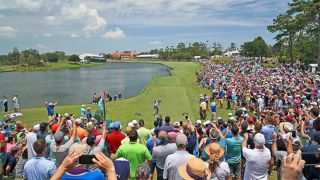 PONTE VEDRA BEACH, Fla.—PGA Tour broadcasts are staying right where they are, as the professional golf organization announced that it has reached a nine-year domestic media rights portfolio for 2022-2030 that will have CBS and NBC continue to serve as the TV home of golf. However, one new wrinkle is that streaming rights for the PGA has been granted to Disney’s ESPN+ service.

As part of the deal, CBS and NBC will maintain weekend coverage of most FedEx Cup tournaments; CBS will handle an average of 19 per season, NBC eight. It was also announced that the two networks will alternate each year who hosts the entire three-tournament FedEx Cup Playoffs (NBC will start in 2022).

A new aspect of the deal with CBS and NBC is that the PGA Tour will now assume responsibility of the onsite production area and technical infrastructure at each tournament. This will help in the tour’s ability to aggregate, distribute and develop content for various platforms. CBS and NBC will still use their own production and announcing teams.

When it comes to streaming, the PGA Tour has struck a deal with Disney’s ESPN+ streaming service. The tour’s subscription video service, PGA Tour Live, will now exclusively be available via ESPN+ starting in 2022. PGA Tour Live, in addition to its thousands of hours of annual coverage of tournaments, plans to expand its live content channels.

In addition, the PGA Tour also expanded the U.S. media deal for the LPGA Tour. The LPGA Tour will have a similar nine-year deal (2022-2030) for its tournaments to air on the Golf Channel, but the deal also details expanded exposure for LPGA Tour events on CBS and NBC each year.

The financial terms of the deal were not disclosed.