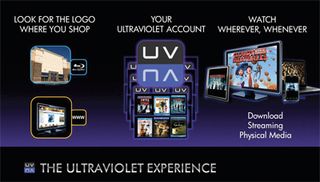 Graphic simulation of the UltraViolet concept
For many, references to "the cloud" are all too apt—an amorphous, poorly-defined fog that looks different to everyone who sees it.

But a cross-industry consortium has wrestled the cloud into submission to paint a vivid picture of the ways in which cloud storage will soon benefit content providers and consumers.

The 2011 NAB Show Super Session "Power to the Consumer! Here Comes UltraViolet!" assembled a cross-disciplinary team of interested parties to discuss UltraViolet, an initiative of the Digital Entertainment Content Ecosystem (DECE). The system, set to debut later this year, provides common paths, methods and tools for distribution of visual media across a range of devices, media and platforms.

Moderated by David Wertheimer, CEO of the Entertainment Technology Center at the University of Southern California, the session attempted to define and describe the UltraViolet project, a collaboration among more than 60 players from different industries.

One of the first goals of UltraViolet, Wertheimer said, was to deliver content in the ways consumers are most comfortable with. Richard Berger, senior vice president of Global Digital Strategy at Sony Pictures Home Entertainment, outlined UltraViolet's cross-media underpinnings: physical products such as DVD and Blu-ray Disc and digitally-delivered streams and downloads. "The good thing about UltraViolet is that we have something for everybody," he said.

Wertheimer said consumers still have great affection for physical media, whether to assuage fears of format compatibility or simply to maintain their movie collections. As a result, he said, "digital sell-through" was a difficult task for distributors.

Mark Teitell, general manager and executive director of DECE, UltraViolet's parent consortium, said consumers also resisted being channeled to a single purchase outlet, preferring to select their retailer of choice. Many were worried that a digital purchase in one specific format might leave them "marooned" if the device or platform faded from public use.

Scott Fierstein, senior director for Interoperability Standards at Microsoft, described the "pillars" the consortium chose as the foundation for UltraViolet: interoperability between services and devices; a consistent, predictable usage model across platforms; and a strong visual identity — a logo—that implicitly guarantees compatibility for both devices and content.

Fierstein also said that creating an effective, platform-agnostic digital rights management (DRM) scheme was key. "I think this is the most innovative thing that came out of UltraViolet," he said. "From the consumer's perspective, the technology is truly transparent."

Tim Dodd, media vice president and general manager at Neustar Media, described consumers' perception of "the right" to move their physical media purchases into the cloud for portable viewing. "I think that, for a while, we'll be in a hybrid physical/digital environment," he said.

Bill Wheaton, vice president for digital media at Akamai Technologies, said that unauthorized download of content was a concern, but that the benefits of UltraViolet were, in themselves, a deterrent. © 2011 NAB