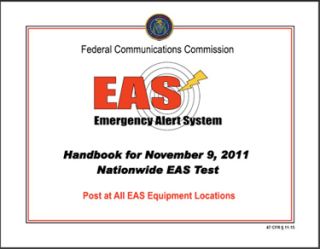 WASHINGTON: The Federal Emergency Management Agency today notified participants in the upcoming nationwide test of the Emergency Alert System that it will run just 30 seconds rather than two-and-a-half minutes as originally planned.

The test, scheduled for Nov. 9 at 2 p.m. Eastern, will be the first official test of a Presidential Emergency Action Notification. All broadcast radio and TV stations must take part in the tests along with participating cable and satellite operators. The national alert system relies on a daisy-chain architecture whereby the EAN is transmitted to designated radio stations that are monitored by State Primaries, which in turn retransmit the alert to Local Primaries that notify all other broadcast and cable participants. The United States is divided into 550 local EAS areas, each with at least two Local Primaries monitoring two sources for presidential alerts. A single failure within the system can leave hundreds of participants out of the loop.

A limited-area test of the system was conducted in 2010 across Alaska, revealing several equipment and communications failures. The Nov. 9 test was originally scheduled after a deadline for the implementation of the new Common Alerting Protocol, or CAP, an XML-based data exchange format allowing alerts to be broadcast simultaneously over multiple types of systems, eliminating the daisy chain. Broadcasters were supposed to be CAP-compliant in September, but due to the timing of equipment coming to market among other factors, the deadline was moved to next June.

The absence of CAP in the nationwide Nov. 9 test caused concern for the cable industry because many systems won’t be able to run a text crawl identifying the alert as a test. National Cable and Telecommunications Association chief Michael Powell wrote to FEMA administrator Craig Fugate in mid-October asking for a postponement of the test so as not to incite panic among deaf and hard-of-hearing cable subscribers.

FEMA confirmed the shortening of the Nov. 9 test, but did not say specifically if the agency did so to reduce the chance of an unintended reenactment of “War of the Worlds.” The change was said to be made at the direction of Secretary of Homeland Security Janet Napolitano.
~ Deborah D. McAdams